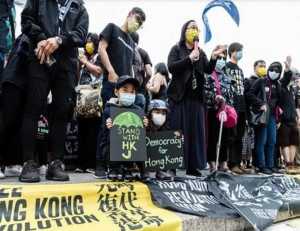 Demonstrations were staged in several cities across the globe on Saturday to commemorate the second anniversary of the pro-democracy movement in Hong Kong.

Since then, several pro-democracy protesters and activists have been arrested and sentenced to jail term.

Since June last year, the sweeping national security law Beijing imposed on the city is being used to stifle political opposition and anti-government protests. The law has dramatically expanded China’s grip on the semi-autonomous city, the Voice of America (VOA) reported.

Spanning across 50 cities, activists and supporters from 20 countries participated in the campaign for Hong Kong. Protests were held in several countries including the US, UK, Canada and Australia. Additionally, virtual events were scheduled in cities such as Bangkok and Taipei, due to the COVID-19 restrictions.

Ted Hui, a former Hong Kong legislator who fled the city, on Saturday, called the rallies a “firm message” that Hong Kongers “have not given up.” Hui told VOA that he had shared with a crowd in his adopted home of Sydney “how I made my determination to devote myself to the movement, a lifelong mission in life.”

“I asked them to make more steps forward, keep the spirits high and preserve our Hong Kong identity to make our movement long and sustainable,” the former legislator said.

Glacier Chung Ching Kwong, Hong Kong political and digital rights activist, who is also in self-exile, addressed gatherings in Berlin, Germany, “In two years, all the people I have worked with are either in jail or in exile,” she told the crowd.

“We are all sad and angry, but we are also vigilant to not let this costly ordeal become a force that clouds us, limits our thinking and undermines the movement or the reason to fight for freedom and democracy in the first place.”

Meanwhile, four people were arrested during demonstrations to commemorate the anniversary of the first major clash of Hong Kong’s 2019 anti-government protests.

The arrests were made on Saturday as Hong Kong witnessed muted demonstrations of small and scattered groups. At about 9:30 pm, police entered Langham Place in Mong Kok after they found about 20 people shouting slogans they said “might breach the national security law”, South China Morning Post reported.

On June 12, 2019, clashes erupted between police and demonstrators outside the Legislative Council after thousands of people protested against an extradition bill that was scheduled for its second reading in the chamber that day. The legislation was finally withdrawn months later.

As things stand, the pro-China authorities have adopted a heavy-handed approach in Hong Kong and have taken actions against demonstrators.

Meanwhile, the momentum of overseas demonstrations in support of the protest movement has remained strong and members of the international community have asked Beijing for a course correction. (ANI)