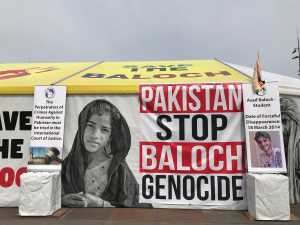 Claiming a systematic genocide in Balochistan by Pakistani security forces, the Baloch Human Rights Council (BHRC) urged the Group of Seven (G7) leaders to investigate the heinous crimes by Pakistan in the region.

In a memorandum addressed to the G7 leaders, the Council urged them to send a UN fact-finding mission to investigate the extra-judicial killings and mass disappearances of the Baloch political and social activists. They also urged that the perpetrators of the heinous crimes against humanity in Balochistan should be brought to justice by initiating cases against them in the international court of justice in The Hague.

The crimes against humanity being committed in Pakistan have several aspects, including the enforced disappearance of political and social activists, extra-judicial killings, the formation of death squads by the army, the formation of proxy militant religious organisations, open patronisation of the narcotics business, and the ruthless exploitation of natural resources by Chinese corporations, he highlighted.

According to Samad Baloch, many prominent Baloch social, intellectual and political figures have been targeted and eliminated by death squads and intelligence operations and the whereabouts of thousands of Baloch are still unknown.

“Pakistani officials have accepted more than 6000 missing persons, and we genuinely believe that their lives are in grave danger. Abductions of students, doctors, teachers, journalists, and human rights activists are taking place daily in Balochistan. The irony is that the Pakistani army is fighting a war in Balochistan without witnesses. The whole province has been declared a no-go area for even the national journalists for the last 15 years,” he said in the memorandum.

Demanding justice for the Baloch, Samad remarked that failing to do so would be tantamount to letting down a people who are being minced under the powerful jaws of the military establishment of a recognised rogue state.

While thousands of Balochs have been abducted and disappeared since its illegal occupation, hundreds of others have been eliminated in the line of Pakistan’s “kill and dump” policy. Thousands still remain unaccounted for.

Due to the silence and numbness of the civilized world and Human rights organizations and lack of the media or other means in Balochistan.

Enforced Disappearance has been used as a tool by the Pakistani state to silence the oppressed people of Balochistan since the very first day of its occupation. While countless abductees have been killed, many of them are still facing inhuman torture in army secrets cells.

Enforced disappearances have been a long stain on Pakistan’s human rights record. Despite the pledges of successive governments to criminalize the practice, there has been a very slow movement on legislation that is equal to nothing, while people continue to be forcibly disappeared with impunity. (ANI)