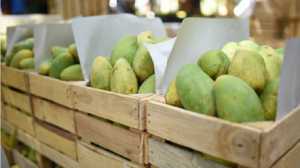 Pakistan’s Foreign Office (FO) sent boxes of the fruit to heads of more than 32 countries on Wednesday but the US and China among others have declined to accept them, the Hindustan Times quoted the ANI news agency as saying.

The agency cited The News International as saying that Canada, Nepal, Egypt and Sri Lanka have also expressed their regrets at accepting the gift.

“Mangoes were delivered to Modi through official channels even as Pakistan was accusing us of flying a drone into its airspace,’’ an official, who did not wish to be named, told HT.

Mangoes, known as the king of fruits, originated in the Indian subcontinent and are scientifically known as Mangifera Indica. It is the national fruit of both India and Pakistan. India is the world’s largest producer of mangoes and grows over 1200 varieties. Pakistan grows a third of that number. (Colombo Gazette)