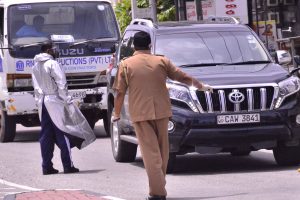 A special operation was conducted in the Western Province including Colombo to nab anyone violating the travel ban.

He said that a Police operation was conducted in the Western Province last morning and again in the evening.

The Police Spokesman said that over 11,000 people were inspected during the operation.

DIG Ajith Rohana said that 354 people were arrested for gross violation of the travel ban.

Most of those arrested were from the Kelaniya area, Gampaha and Colombo.

He also said that a number of vehicles were also seized during the operation.

The Police Spokesman said that a similar operation was conducted in Colombo today to detect people taking to the streets for no valid reason.

He said that individuals taking to the streets for no valid reason will be arrested and their vehicles will be seized.

A travel ban is currently in force till 21st June. (Colombo Gazette)