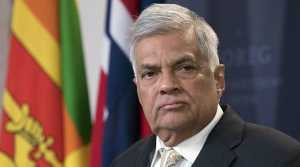 Former Prime Minister and Leader of the United National Party (UNP) Ranil Wickremesinghe today urged the Government not to politicize the GSP Plus trade concession from the European Union (EU).

He recalled that his Government took action to regain the GSP Plus from the European Union to assist in developing the country’s economy in 2017.

“This facility provides Sri Lanka with permission to export goods to Europe without taxation, which led to a boom in the garment and fishing industries,” he said.

Wickremesinghe said that an issue has now arisen in the European Parliament regarding the GSP Plus tax concession.

“We have been warned that this concession will be revoked,” he said

Wickremesinghe noted that Sri Lanka’s tourism industry is at risk at this time due to the COVID-19 pandemic.

He also said that with the sinking of the X-Press Pearl issues have arisen for Sri Lanka’s fishing industry as well.

Wickremesinghe said that in such a situation Sri Lanka is reliant on the GSP Plus and if the tax relief is lost, the Rupee will depreciate further and Sri Lanka will have to pay around 300 Rupees per Dollar.

“It will also lead to the loss of thousands of jobs,” he said.

In the face of the danger that has arisen, Wickremesinghe said that the GSP Plus must not be politicized and the Government should take immediate action to protect the concession.

“Do not add any more weight to the heavy economic burden that the people are carrying. I urge the government not to destroy the country,” he said.

The EU Parliament adopted a resolution on Sri Lanka last week calling for the repeal of the Prevention of Terrorism Act (PTA).

Sri Lanka regained access to generous EU tariff preferences under the GSP+ on 19 May 2017, on the condition that it replace the PTA and effectively implements 27 international conventions, including on human rights.

EU MPs are now calling on the European Commission and the European External Action Service to use the GSP Plus as leverage to push for progress on Sri Lanka’s human rights obligations.

They also want them to carefully assess whether there is sufficient reason, as a last resort, to initiate a procedure for the temporary withdrawal of Sri Lanka’s GSP Plus status. (Colombo Gazette)