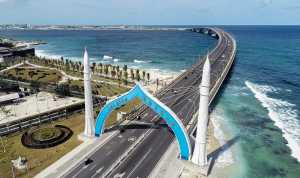 Maldives, a small island nation in the Indian Ocean region with one of the largest exclusive economic zones in the world, is strategically located along the trade route carrying significant portions of the world’s energy needs through the Gulf of Aden/Strait of Hormuz and the Strait of Malacca.

Despite its size and population, Maldives today has become an increasingly important player in the geopolitics of the Indian subcontinent that major countries with stakes in the region cannot possibly ignore.

In continuation of its neighbourhood first policy and vision of SAGAR -Security and Growth for All in the Region, India recently approved the opening of a new consulate in Maldives2 hoping to provide market access for Indian companies, bolster Indian exports of goods/services and to augment its diplomatic presence in the island nation.

Currently, India is developing projects worth US$ 2 billion covering a large number of areas like ports, roads, bridges, water and sanitation systems as well as those related to socio-economic development.3 This renewed effort at cooperation comes at a time when China is increasingly becoming assertive in the region attempting to take strategic advantage of Maldives’ geographical location.

With growing Chinese presence on the island characterized by its vociferous assertions, reports indicate that President Solih may scrap the Chinese plan of constructing an underwater Joint Ocean Observation Centre (JOOC) similar to that at the South China Sea, in a Maldivian island, close to India’s Lakshadweep port.

In fact, both the countries had initially signed an official agreement titled Protocol on Establishment of Joint Ocean Observation Station in 20176 aimed at maintaining vigil on the Indian Ocean shipping route and which was likely to serve a dual purpose having both civilian and military applications.

Further, it is important to note that there has been a steady rise in the resentment of Chinese projects in the country. Former President of Maldives Md. Nasheed has claimed that China has already acquired 17 northern most atolls from Maldives at throwaway price promising to develop these picturesque locations as tourist sites.

However, he mentioned that these were being done without providing enough clarity
about other Chinese activities on these islands to the local authorities.

The Chinese interest in Maldives needs to be examined from the prism that China has been consistently trying to make inroads and expand its influence in the Indian Ocean region. The development of the Gwadar port8 as part of the China-Pakistan Economic Cooperation, for enhancing maritime cooperation with Pakistan is another important initiative in this direction.

China, as part of a deliberate well crafted plan to increase its global footprints, is tactfully engaging developing countries especially those that are economically and politically weak, across the world including the Indian subcontinent into signing unsustainable & unviable debt-for-infrastructure deals. As part of the same principle, the former President of Maldives, Md. Abdullah Yameen had obtained Chinese assistance for the China-Maldives Friendship Bridge under the Belt and Road initiative.

Post elections, when a new Maldivian government under Md. Ibrahim Mohammed Solih was sworn in; they were surprised to know about Chinese debt worth US$ 3.1billion that the Maldivian economy was reeling under. This undoubtedly is an astronomical sum for a small island nation with GDP of roughly around US$ 4.9 billion that rests primarily on tourism and fisheries.10 The government cautioned its citizens that China is trying to be the new imperial power in the region expressing worry and concern that Maldives could meet the same fate as Sri Lanka, another island nation that lost its rights to access and benefit from the Hambantota port because of a 99- year lease with China in 2017. This typically explains Beijing’s debt-clench policy, wherein using its economic superiority and monetary might, China extends outsized loans to weaker foreign countries on terms and conditions that make them difficult to repay. This is when the Chinese intervene; play hard to recover these loans, offer minor waivers and gain access to other infrastructure projects while forcing the ‘beneficiary’ country to give up the sovereignty of its own territory associated with the project.

In recent years, China has made no secret of its space ambitions aiming to become a technological superpower by 2049 by pouring billions of dollars into its space research and scientific efforts. The country also became the first one to send an un-crewed rover to the far side of the Moon which is no small feat. Admittedly, China’s space doctrine has three pillars: 1. national development 2. military empowerment 3. great power competition.

Thus China frequently casts the space dream as a step in its path to national rejuvenation. At the same time, China’s burgeoning space program with multiple missions to outer space has contributed to an increasing problem of space debris. This is dangerous since space has traditionally been considered a realm free for all where every player is expected to behave responsibly in safeguarding global interests. Recently however, the debris from China’s disintegrating largest rocket Long March fell into the Indian Ocean close to Maldives posing a great threat to humans/property.

For days before the actual fall occurred there was uncertainty about where the debris would land creating anxiety and panic across the human race.

This was unprecedented and totally uncalled for, condemned by many nations. The re-entry of the rocket, described by astrophysicists as the fourth-largest uncontrolled re-entry in history, had evoked concerns about possible damage if fallen on land and was criticised even by the National Aeronautics and Space Administration (NASA) for failing to meet responsible standards adding that space faring nations must minimize the risks to people and property on Earth and maximize transparency regarding those operations.

The latter part of that statement is significant since China’s military activities in outer space are mostly unknown, causing anxiety everywhere, especially since it destroyed one of its own satellites in 2007, spreading thousands of pieces of debris in space and putting its reliability into question.

Further, it is pertinent to state that China is expected to carry out more launches in the months to come, as part of its aim to complete the space station project next year, which incidentally would be the only space station operating in the near-earth orbit in the coming years. Amidst the celebration in Chinese media over the successful mission to Mars recently, there is also talk about a potential shared lunar station with Russia to conduct exploratory missions to the Moon aimed at establishing a robotic research station there and later an intermittently crewed base.

Also, China continues to train its military space elements by fielding new destructive as well as non-destructive anti-satellite weapons, invariably with a clear military mandate for future operations. Blackballing China, US to dawn an Embassy In Male In a historical shift, the United States, has decided to open its embassy in Maldives to strengthen economic and security cooperation between the two nations almost five decades after establishing diplomatic ties. The latest move is seen as part of Washington’s push to curb Beijing’s influence and thwart its lawless statecraft in the region.

The US’s deepening relations with Maldives is stated to be aimed at establishing an open and a free Indo-Pacific, which naturally has irked China to the extent that the Chinese Foreign Ministry spokesperson Mr.Wang Wenbin lashed out at the development as an American attempt to sow seeds of discord between China and other regional countries.

India however, welcomed the move, stating that the US decision will complement its own role as a net security provider in the region23 facilitating cooperation with its neighbours in the Indo-Pacific on maritime security. Receptive to the US presence, India is mindful of the growing Chinese influence in the Maldives particularly after 2012, when an Indian infrastructure company, GMR Group, was allegedly unlawfully denied an award of developing the Male international airport.

Against the background of China’s attempts to increase its presence, it is noteworthy to mention that in recent years, the US naval vessels have regularly conducted port calls at Maldives to combat terrorism and terrorist financing. Not only this, during the pandemic, the US pledged to provide US$ 2 million in assistance to Maldives for COVID-19 recovery24 along with some millions more in economic support aimed at strengthening Maldives’ fiscal transparency, maritime security, and counter-terrorism efforts.

As Chinese investments, land acquisitions, space and military projections grow; Beijing is increasingly seen as taking a more aggressive stance while collaborating with smaller nations that do not have much economic wherewithal. In the context of Maldives, whether it is commercially unsustainable projects, economically unviable loans or the more recent rocket debris entry, China doesn’t hesitate to assert its presence in the island nation. In the long run, one will have to watch out for possible political instability and security developments in the Maldives which could directly impact maritime interests of countries concerned about the Indo Pacific. With the current power flexing between global players, it is in the interest of these countries to ensure that the self-governing rights of smaller countries remain protected and they continue to function as sovereign, independent nations.