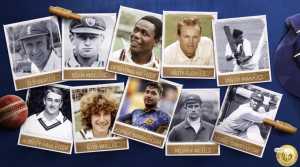 Former Sri Lanka cricket captain Kumar Sangakkara is to be inducted into the ICC Hall of Fame.

Sangakkara ended his career as the most prolific run-scorer his country had ever known, with double-hundreds flowing from his bat with consummate ease.

In 2014 he struck 319 and 105 in the same Test match against Bangladesh and in 2017 fell just 16 runs short of striking six successive centuries in first-class cricket.

The International Cricket Council (ICC) today announced a special edition intake of 10 cricket icons into the ICC Hall of Fame to celebrate the prestigious history of Test cricket, and to coincide with the first ever ICC World Test Championship Final.

The 10 legends of the game to be inducted have all made a significant contribution to the history of Test cricket, and join an illustrious list of ICC Hall of Famers, taking the total number to 103 as a result of this intake.

The 10 icons inducted as part of this special edition were voted for by the ICC Hall of Fame Voting Academy, comprising living Hall of Fame members, a FICA representative, prominent cricket journalists and senior ICC figures. (Colombo Gazette)