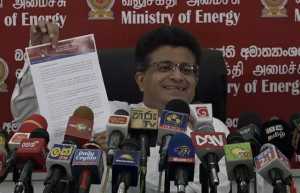 Speaking to reporters today, Gammanpila also said that Sri Lanka Podujana Peramuna (SLPP) General Secretary Sagara Kariyawasam did not have the consent of the party to call for his resignation over the fuel price hike.

Gammanpila told reporters today that the decision to increase the price of fuel was taken after extensive discussions.

He also said that a fuel price hike is a matter which comes under the purview of the Minister of Finance.

However, he said that he voluntarily decided to make the announcement on the fuel price hike to protect Prime Minister Mahinda Rajapaksa, who is the Minister of Finance.

SLPP General Secretary Sagara Kariyawasam had said yesterday that raising fuel prices at a time when the public are already facing difficulties as a result of the coronavirus is unacceptable.

He said that the Energy Minister must take responsibility of the situation and resign.

However, Gammanpila said that based on the latest revelations it is Kariyawasam who must resign. (Colombo Gazette)