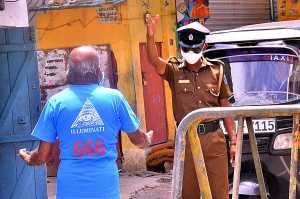 Several people attempting to enter the Western Province were turned back yesterday, the Police said.

He said that 3153 people and 1024 vehicles were inspected when crossing the border yesterday (Friday).

The Police Spokesman said that 91 people who arrived in 60 vehicles were turned back for attempting to cross the border for no valid reason.

Army Commander General Shavendra Silva announced yesterday that the travel ban will be extended till 4am on 21st June.

He said that a number of institutions and essential services will be permitted to operate during the travel ban.

The request was made on the basis that extending it by another week will help contain the spread of the virus. (Colombo Gazette)