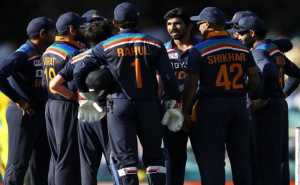 The second-string Indian squad for the Sri Lanka series will assemble in Mumbai from June 14 to undergo a two-week quarantine.

ESPNcricinfo has learnt that the members of the Indian contingent have been asked to take a Covid-19 test before they reach the team hotel in Mumbai, where they will undergo regular testing during the two-week period.

The Indian squad, which will be lead by senior batter Shikhar Dhawan, will land in Colombo on June 28. The visitors would then undergo another three-day quarantine in their hotel rooms before starting training in a controlled fashion as per the guidelines laid out by Sri Lanka Cricket (SLC).

On Friday, the SLC issued a media release stating the Indian squad would train in smaller groups between July 2-4. Between July 6 and 12, the entire squad will be free to train before the ODI series, which begins from the 12th. All six matches in the series, comprising three ODIs followed by equal number of T20s, will be played under lights at the R Premadasa stadium in Colombo.