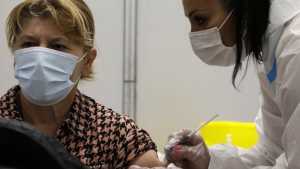 G7 leaders are to commit to using all their resources in an effort to ensure the devastation caused by a pandemic like Covid-19 is never repeated.

On the second day of their summit in Cornwall, they will issue a declaration that sets out a series of measures intended to achieve this.

The aim is to slash the time needed to develop vaccines to under 100 days.

Mr Johnson, who is hosting the three-day gathering at the Cornish seaside resort of Carbis Bay, said it was vital to learn from the “mistakes” of the 2008 financial crisis and tackle the “scar” of inequality.

After Friday’s talks, the leaders were joined the Queen for a dinner at the nearby Eden Project.

As they posed for a group photo, the monarch was heard to joke: “Are you supposed to be looking as if you’re enjoying yourself?”

The leaders around the Queen laughed, and Mr Johnson replied emphatically: “Yes.” The prime minister added: “We have been enjoying ourselves – in spite of appearances.”

The G7 (Group of Seven) is an organisation made up of the world’s seven largest so-called advanced economies: Canada, France, Germany, Japan, Italy, the UK and the US.