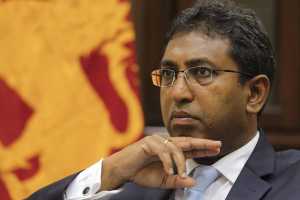 The opposition Samagi Jana Balawegaya has vowed to make drastic changes to the Port City project if it comes to power.

SJB Parliamentarian and former State Minister Dr. Harsha de Silva said that an SJB government will look to take the project beyond China.

Dr. Harsha de Silva was responding to a question raised on a Twitter Spaces discussion hosted by Daily Mirror Twitter.

He said in its current form the Port City is likely to be marketed as a project of the Chinese company managing the Port City or a Chinese project and not Sri Lankan project.

“Geo-politics is as important as the law. When we come we hope we will be able to take the project to beyond China,” he said.

Dr. Harsha de Silva said that the project was suspended in 2015 by the then government over concerns related to the deal between China and Sri Lanka and the environment.

He also noted that the SJB has no issue with Chinese investments, but its policy is that Sri Lanka must not be partial to one country.

The former State Minister noted that Sri Lanka must have countries like India and Japan on its side.

He said that Sri Lanka was sending the wrong message by rejecting Indian and Japanese projects and approving Chinese projects.