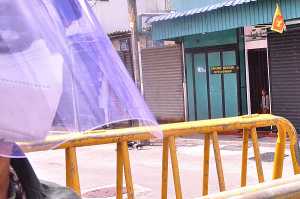 The Police today confirmed that the travel ban is set to be lifted on Monday.

Police Spokesman, Deputy Inspector General (DIG) Ajith Rohana said that the travel ban will be in force only till Monday 14th June.

“The travel restrictions will only be in force for the next three days,” he said.

However, he said the travel ban will be strictly enforced over the next three days.

“We expect you to stay at home over the next three days,” the Police Spokesman said.

The Police has so far arrested over 29,000 people for violating the travel restrictions.

Army Commander General Shavendra Silva announced yesterday that the ban will not be extended and will be lifted at 4am on Monday 14th June.

Health inspectors had claimed that the travel ban which was extended until 14th June was ineffective due to a large number of people still moving around the streets. (Colombo Gazette)