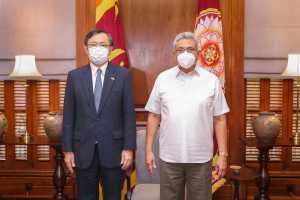 Japan refused to confirm reports that it is considering giving Sri Lanka 600,000 doses of the AstraZeneca COVID-19 vaccine.

When contacted by Daily Mirror, the Japanese Embassy in Colombo was non-committal on the matter.

Responding to an email from Daily Mirror, the Japanese Embassy said that when circumstances allow and at an appropriate time, Japan will allocate around 30 million doses of vaccines manufactured in Japan to other countries and regions, including through the COVAX Facility.

“Since our HQ is in review of further details, the Embassy would like to refrain from making comments including the communication in reference with the Government of Sri Lanka,” the Japanese Embassy said in a brief response.

On Wednesday the President’s Media Division had said that Japan was considering a request from President Gotabaya Rajapaksa for 600,000 doses of the AstraZeneca COVID-19 vaccine.

Sri Lanka has vaccinated nearly one million people with the AstraZeneca Covishield vaccine from India.

The government is urgently seeking 600,000 doses to complete the administering of the second dose of the AstraZeneca vaccine.