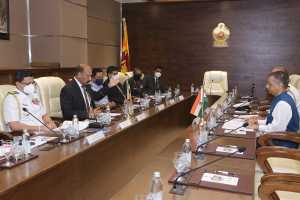 India and Sri Lanka had talks today focused on defence and security cooperation.

The Commanders of the Sri Lanka Navy and Air Force and the Chief of National Intelligence also attended the talks.

At the meeting the Defence Secretary recalled the long existing bilateral ties and cooperation between the two countries.

The meeting was held while adhering to the stipulated health guidelines to contain the spread of COVID-19, the Defence Ministry said.