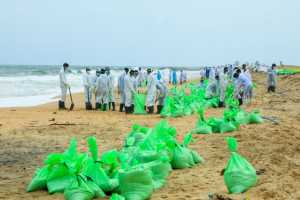 The Government is to seek the assistance of volunteers to clear some of the debris washed ashore from the ship MV X-Press Pearl.

Debris collected so far has been stored in containers and kept at a safe location, the Government said.

State Minister of Urban Development, Coast Conservation, Waste Disposal and Community Cleanliness Dr. Nalaka Godahewa told Daily Mirror that the debris, including plastic pellets, collected from the shore are being kept for insurers to evaluate.

Sri Lanka is to seek compensation for the damage caused to the environment and livelihood of communities along the shores affected by the debris from the ship MV X-Press Pearl.

Godahewa said that most of the debris had been cleared but some still remains.

The State Minister said that a private company has offered a new system where the debris can be collected without the sand and that system will be implemented in a number of areas.

He also said that assistance will be sought from volunteers to clear some of the debris in a safe and systematic manner once the travel restrictions are lifted.

Meanwhile, the government is yet to reach a final determination on the compensation it will seek from the ship owners for the damage caused to Sri Lanka by the fire.

Godahewa said that the compensation cost is still being evaluated as it must include payments for fishermen and others who have been affected as a result of the incident.

The State Minister asserted that every effort is being taken to ensure normality is restored to the coastal areas as soon as possible.