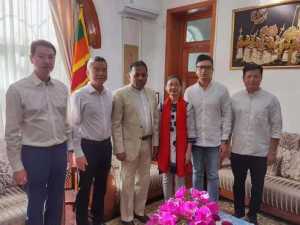 Owing to the strains in the relations of Sri Lanka and China due to latter’s incessant debt-trap diplomacy in the Sri Lankan region, it did not come as a surprise that scores of netizens and viewers found problems with the Sri Lankan Princess Xu Shi Yin’e attending this year’s Vesak celebrations at the Sri Lankan Embassy in Beijing on May 26. She is a 19th generation descendant of a prince from the court of King Parakramabahu VI of Kotte, and has created turmoil in the internet within the Sri Lankan population and those of the same diaspora all around the world.

Numerous Sri Lankans who are now careful about the developing presence of China and Chinese nationals across the lengths and the breadths of Sri Lanka have taken to online media stages to address and mocking these claims. Some are communicating outrage and disappointment over the impunity of China for tweeting about “Lanka Princess”, especially since it is the same country it is committing outrageous activities in, like capturing one of the major ports.

As per Sri Lankan folklore, a fifteenth century Sinhalese King had remained back in China after he married a Chinese woman. Chinese media and authorities guarantee Xu Shi Yin’e is an immediate relative of that ruler.

During the 1990s, her character became known when a development project took steps to annihilate her family’s entombment burial chambers in Shijia Tomb on Mt. Qingyuan. Subsequently, the historical backdrop of the Ceylon Prince in Quanzhou was revealed. Legends express that a Ceylon sovereign visiting China couldn’t get back to his country on account of a cousin who had usurped his dad’s seat at Kotte and executed his siblings. In this way, he remained in China, got married to a native and settled down, taking up the name of ‘Shi’. As indicated by Yin’e, the explanation he didn’t return isn’t political yet essentially romantic in nature. Some even contend that the ruler was Alakeshvara, the fearless lord of Kotte who was snatched and taken to China by the commanders of Ming lineage. Subsequent to acquitting him, the Ming sovereign had introduced Parakramabahu VI as the new ruler in Sri Lanka.

These claims by China, however, do not have any basis, and there has been no attempt to authenticate their veracity.

As per Sasanka Perara of South Asian University, there is a stunning silence on the Chinese pugnacity in the fifteenth century despite the fact that there are sufficient references to the episode from records of the time as well as from the works of modern researchers like Edward Dreyer, Louise Levathes, Senarath Paranavitana and others. Every one of these sources together offer a sensible feeling of what happened in Lanka as well as the overall setting and political issues of Chinese maritime development in the fifteenth century.

China’s recent claims about sharing a history are being named as a Chinese joke on Sri Lankan history. Some are in any event, considering it a Chinese psychological manipulation to catch Sri Lanka by planting such “nonsensical” stories to set up an ancient connection, which would allow it to invade the Sri Lankan territory on the pretext of being ‘friends’.

Philip Friedrich, a historian and an analyst, rubbished the claims made by China about the Ceylonese sovereign hypothesis. He said, “The Mahavamsa and Sinhala vamsas (texts like the Rajavaliya and Rajaratnakaraya) don’t offer a clear genealogy of Parakramabahu VI’s royal household. This whole period is a historiographic morass”.

Friedrich has tried to debunk the Chinese theories in a series of tweets. “I don’t know what the intentions behind the ‘Ceylon Princess’ story are – if it’s part of long-con, Chinese influence operation in SL, at least they got the Quanzhou part right! But one thing that the story can’t offer is an unmediated link to an ‘authentic’ Sinhala sovereignty,” he said.

China has made hefty investments in Sri Lanka and the island country has acquired billions of dollars from China over the past 10 years to take up big infrastructural projects. China as of now controls the Hambantota port in the south and is building an international port city directly close to the Sri Lankan President’s official residence on the land recovered from the Indian Ocean. This port city will resemble a Chinese settlement in the Sri Lankan capital, claim numerous local people.

Although the Sri Lankan authorities and the government haven’t made any comments on China’s claims of having a shared history, it seems that the general population has pretty much rejected the idea.