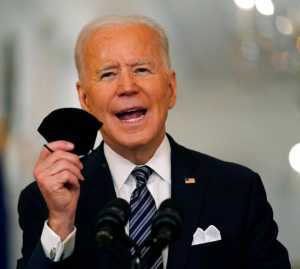 In many ways, the coronavirus originated in precisely the wrong country. Not only is China densely populated and interconnected with the world in a way that allowed the virus to spread quickly, but it has a demonstrated lack of transparency on such things. And its stature in the world makes seeking transparency and accountability very difficult.

Now that the theory that the coronavirus originated in a Wuhan lab has gained prominence, that latter problem is rearing its ugly head. The Biden administration, which has declared its desire to get to the bottom of that question, is confronting some very difficult choices about how to pursue it.

Thus far, it’s not exactly launching into an overt pressure campaign.

Several times in recent days, top Biden administration officials have been confronted with the same question: How do you get a clearly reluctant China to play ball with international investigators?

The administration line, for now, seems to tend more toward the carrot than the stick. Officials have repeatedly cited the idea that China should have an interest in getting to the truth. But when confronted with the very obvious fact that China has an incentive to cover up a potential lab leak, they’ve shied away from detailing what kind of pressure might be brought to bear.

Top government infectious-disease expert Anthony S. Fauci was pressed on this Thursday on MSNBC. When he said that “it’s obviously in China’s interests to find out exactly” how the virus came about, Willie Geist logically followed up with a counterpoint: Isn’t it also in their interest to conceal that information “if there was a lab leak — or worse?”

“I don’t want to be speculating on that, because every time I say something like that, you know it as well as I, it will get completely taken out of context, and go into the Twitter world like crazy,” Fauci said. “So, I mean, I’m going to leave that to other people and not surmise and guess who’s interest it is. It’s not helpful.”

But Fauci was just moments before quite happy to comment on China’s motivations when it came to learning the truth — at least for itself. If we’re being charitable, it’s not really his place to evaluate political incentives, given his status as a scientist. But he certainly ventured into that territory. And it’s hardly shocking to say that China might not be terribly interested in a full investigation of a potential lab leak.

It has since become evident that this is the administration’s line. In an interview broadcast Sunday night on “Axios on HBO,” Secretary of State Antony Blinken said that “it’s profoundly in China’s interest to do this as well,” given its experience with the virus.

Again, though, this might address China’s interest in finding out the truth for itself, but it doesn’t necessarily address its interest in broadcasting such information to the world. And there are plenty of reasons to believe China would suffer from adverse findings. A lab leak would not only suggest it engaged in a coverup over the past year and a half, but real people being responsible for unleashing the virus on the world would assuredly lead to calls for accountability. There’s not really any mystery here.

Blinken, at least, seemed to hint at the idea that such accountability might await China if it doesn’t cooperate.

“It presumably has an interest as well, especially if it purports to be a responsible international actor, to do everything it can to provide all the information it has to make sure we can hopefully prevent this from happening again,” Blinken said.

But when pressed on what kinds of things might force such accountability — Axios’s Mike Allen threw out the possibility of sanctions if China deprives investigators of access — Blinken didn’t point to anything specific:

Q: So to get those answers, to do a proper investigation, you’re going to need — the U.S. is going to need access to the labs. Will you demand that? Will you put teeth on it? Will you even go as far as sanctions on China if they keep inspectors out?

Q: So what’s the real pressure the U.S. will put on China for access to the lab?

Q: And you kind of expect that?

Q: That’s been the history.

BLINKEN: Mike, at the end of the day it’s profoundly in China’s interest to do this as well, because, look, it suffered too in the outbreak of this pandemic. It presumably has an interest as well, especially if it purports to be a responsible international actor, to do everything it can to provide all the information it has to make sure we can hopefully prevent this from happening again.

The text of the exchange actually kind of undersells how difficult this question was for Blinken. He paused notably when asked what the “real pressure” was going to be. And unfortunately, when he seemed to be walking toward actually answering the question, he was diverted by a related question about what he expects China to do.

But we still don’t really have those specifics. White House press secretary Jen Psaki was asked Monday what steps were being taken to press China, and she mentioned, very broadly, “engaging, certainly, at the highest levels” with China and working with the World Health Organization and international partners to “exert that pressure.”

That echoes what Blinken said. It’s a kind of nebulous assurance that China is feeling and should feel pressure to do the right thing. Exactly what that pressure is, though, we still don’t know. And for China, any such pressure must be measured against the negative consequences of an adverse finding on the lab leak theory.

As with anything like this, the question is how much is happening behind the scenes that we don’t know about. Diplomacy is often best conducted behind closed doors. But we’ve already had a year and a half of that kind of diplomacy, with China continuing to give the international community the stiff arm. A report from CBS News’s “60 Minutes” airing around the time as the Blinken interview Sunday reinforced just how much the WHO team was deprived of true access to China’s information and labs.

It also has been three months since the WHO, which has long been criticized for kowtowing to China, criticized China for a lack of access in its investigation of the virus’s origins.

Perhaps the rise of the lab leak theory and subtle and more private diplomacy will cause China to change its ways. But there are plenty of reasons to be skeptical of that. And given the premium the Biden administration has now placed on getting to the truth, its ability to do so — including using the levers required, both private and public — is a big early test. (Washington Post)