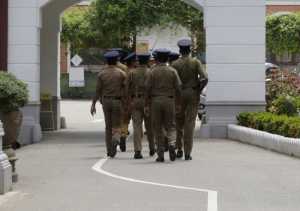 The public have been warned of an extortion racket carried out by criminals impersonating officers of the Criminal Investigations Department (CID) and Terrorism Investigation Division (TID).

Residents are contacted via their landline telephones by the suspects, claiming that statements are required to be recorded pertaining to the investigations into the 2019 Easter attacks.

The residents are thereafter instructed to deposit between Rs. 20,000 – Rs. 30,000 as the transportation fee for the officers to record the statement at their residence.

The suspects have also warned the residents that they will have to appear before the CID or the TID if they fail to deposit the requested money.

DIG Ajith Rohana said this is a new type of scam being carried out by criminals, and urged the public not to fall victim to such fraudulent activities.

Stating that several complaints have been filed in this regard, he said the Police have launched investigations into the complaints. (Colombo Gazette)