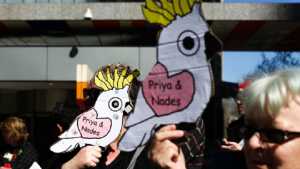 Australia’s asylum-seeker policies have come under scrutiny after concerns were raised over the plight of a Sri Lankan family who have been detained on an isolated Australian island for almost two years.

The plight of a Sri Lankan Tamil couple and their two young daughters who’ve been detained on an isolated Australian island for almost two years is shining the spotlight on the government’s asylum-seeker policies and fueling demands for change, Bloomberg reported.

Priya and Nades Murugappan fled to Australia in 2012 and 2013 on separate journeys fearing persecution from Sri Lankan authorities. They settled in the rural town of Biloela during a protracted legal battle over their immigration status, but were transported to Christmas Island, more than 1,500 kilometers (930 miles) west of the mainland in 2019 along with daughters Kopika and Tharunicaa, now aged 5 and 3.

Campaigners say the younger girl’s health has suffered while in detention and earlier this week she was medically evacuated to the city of Perth with suspected pneumonia and a blood infection. That’s thrust their case back into the headlines, with fresh demands the government finds a solution.

The Australian Human Rights Commission “calls for an urgent and compassionate resolution, and for this family to be housed safely in the community,” it said in a Facebook post. “The island is more than 2,500 kilometers from Perth and has very limited acute healthcare facilities. The human rights of the family’s two young children, in particular, should be the first priority.”

Australia has taken a tough stance on asylum seekers traveling by boat since then-Prime Minister John Howard in 2001 refused to allow in a vessel carrying more than 400 mostly Afghan refugees.

The issue of migration has been used by parties on the left and right to drive support. Since 2013 the conservative government has maintained a policy of holding people who arrive by boat in Pacific island camps while their claims for asylum are assessed, and ensuring none will be settled in Australia.

The government says the policy has stopped the people-smuggling trade, where would-be asylum seekers crossed the ocean in rickety, overcrowded boats — with hundreds drowning.

Kristina Keneally, the home affairs spokeswoman for the main opposition Labor party, called on the government to end the long-running saga involving the Murugappan family and allow them to return to Biloela.

“These two little girls born in regional Queensland should not be living behind bars, ‘in jail’, as Kopika described it to me,” Keneally told the Australian Broadcasting Corp.

Home Affairs Minister Karen Andrews on Tuesday indicated the government was willing to find a resolution.

“We are going through the process now of investigating a range of resettlement options in relation to a number of different circumstances here in Australia,” Andrews said. Foreign Affairs Minister Marise Payne said on Tuesday that the government was looking at resettling the family in the U.S. or New Zealand. (Colombo Gazette)