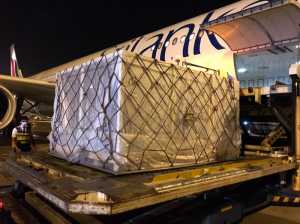 Another one million doses of Sinopharm vaccines arrived in Sri Lanka today.

The vaccines are part of doses purchased by Sri Lanka from China.

The new consignment arrived at the Bandaranaike International Airport (BIA) in Katunayake via a SriLankan Airlines flight around 05 am today.

State Minister Professor Channa Jayasumana said Sri Lanka has received a total of 3.1 million doses of the vaccine with the arrival of the latest consignment.

Sri Lanka initially received 600,000 doses of the vaccine from China as a donation.

Meanwhile, the second jab of the Sinopharm vaccine was administered to the public yesterday (08).

The inoculation of the Sinopharm vaccine to pregnant women commenced today (09). (Colombo Gazette)