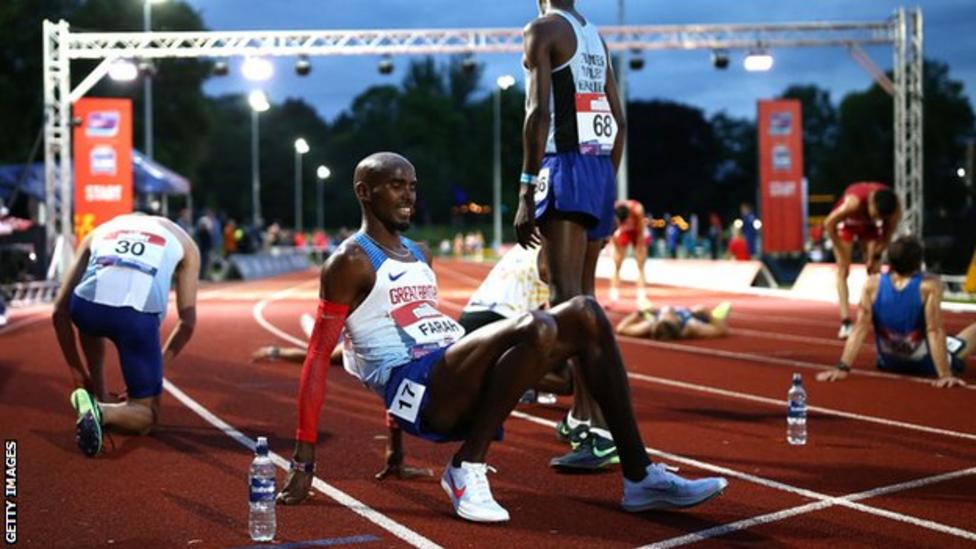 Two-time defending champion Mo Farah’s hopes of representing Great Britain in the Olympic 10,000m seem to be over after he fell short of the qualifying mark in the European 10,000m Cup.

The 38-year-old was eighth, behind fellow Briton Marc Scott, in a race that doubled as the Olympic trial.

Farah’s time of 27 minutes 50.54 seconds in Birmingham was more than 22 seconds short of the required time.

Farah said afterwards that he was carrying an injury to his left ankle.

“I’m disappointed with the result,” he said.

“The last 10 days hasn’t been great but no matter what I achieve in my career it’s important I come out and show at the trials.

“It would have been easy not to show. I dug in deep and with 15 laps to go, you know my face, I was hurting hard. I had to keep fighting and digging in.

“What makes us great is being able to challenge yourself and prove it. So that is what you have got to do as the next stage.”

Farah has until 27 June to dip inside the 27:28 standard for Tokyo.

Alternatively he could turn his attention to the 5,000m, an event he also won gold in at both London 2012 and Rio 2016, at the British Championships on 26 June.

However, Farah’s disappointing performance suggests that his plan to retire after a track comeback in Tokyo may be brought forward.

Farah has spent the past three-and-half years attempting to replicate his track success on the road, but his marathon switch failed to stick.

In his first track 10,000m since winning the 2017 world title in the London Stadium, it was clear that the event has moved on.

Uganda’s Joshua Cheptegei, who finished second at London 2017, has succeeded him as world champion and, in October, broke Kenenisa Bekele’s 15-year-old world record with a time more than 35 seconds quicker than Farah could manage at his best.

Scott’s prediction that Farah’s aura of invincibility had faded proved correct as he finished 0.7 seconds clear of his domestic rival. As the first Briton home, and with the qualifying time clocked back in February, it was enough to claim his own ticket to Tokyo.

Frenchman Morhad Amdouni was well clear of both, winning in 27:23.39. (Courtesy BBC)