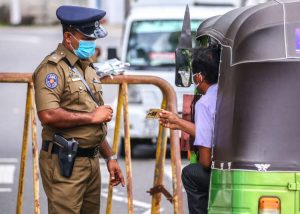 Six Police teams have been deployed to verify if people entering Colombo for essential services during the islandwide travel ban are genuinely engaged in the services.

He said a majority of the vehicles had entered through High-Level Road and the Kandy Road.

A total of 60,235 vehicles had entered Colombo during this period, claiming to be engaged in the essential services sector.

DIG Ajith Rohana said as per a survey conducted today, 16, 571 vehicles were engaged in the essential services sector.

He said 8,412 vehicles were from the Health sector, and 9,498 vehicles were transporting employees of Government and essential services institutions.

However, 1,673 vehicles had attempted to cross borders under the guise of operating for the essential services sector.

The Police Spokesman said some people were warned and turned away, while some have been arrested for violating the islandwide travel restriction currently in effect in Sri Lanka due to the coronavirus situation. (Colombo Gazette)