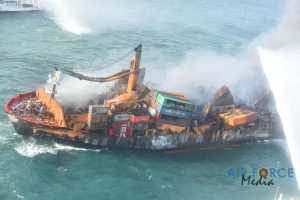 Government analysts will inspect the MV X-Press Pearl vessel that caught fire off the coast of Colombo.

Police Spokesman, Deputy Inspector General (DIG) Ajith Rohana said arrangements have been made for a team of officers from the Government Analyst Department and the Criminal Investigations Department (CID) to board the vessel today.

He said the officers will board the vessel with the assistance of the Sri Lanka Navy but the operation depends on the weather.

The Criminal Investigations Department (CID) is continuing its probe into the vessel which caught fire in Sri Lankan waters.

The CID has recorded 13 statements so far, including from the Captain, and the Chief and Deputy Chief Engineers of the vessel.

The Police Spokesman said the CID has also obtained copies of emails that have been exchanged between the Captain of the vessel, the owners in Singapore, and the local agent in Colombo.

Attempts to tow the distressed vessel into deep seas were halted yesterday after the vessel hit the sea bed as a result of the rear end sinking.

The marine environment off the coast of Colombo suffered extensive damage due to the cargo, including hazardous chemicals, falling into the sea after a fire broke out on the vessel. (Colombo Gazette)