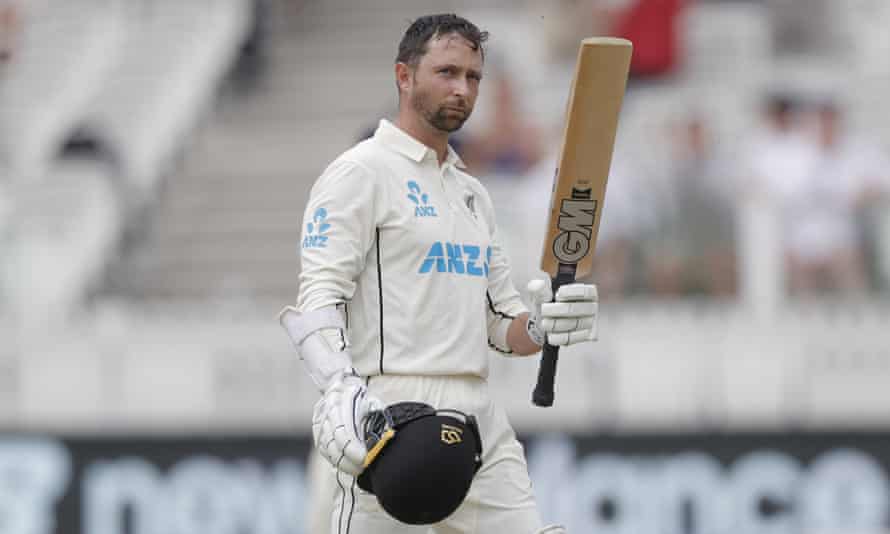 England made strides towards a first-Test fightback on an entertaining second day against New Zealand at Lord’s.

The tourists’ total included 200 from Devon Conway, who became only the seventh man to make a double century on Test debut.

While Conway was unmoved, it was a fine effort by England to take wickets at the other end, at one stage claiming four for six runs.

They were inspired by the energy of Mark Wood, who produced a spell of 3-7 to earn the rewards his wicketless first day deserved.

Debutant Ollie Robinson, a day after apologising for historical racist and sexist tweets, picked up two more wickets to end with 4-75, while James Anderson took 2-83.

England were teetering when Dom Sibley was dismissed without scoring and Zak Crawley for two, only for Rory Burns to make 59 not out and Joe Root an unbeaten 42 in a third-wicket stand of 93.

This Test – England’s first home match in front of a crowd for almost two years – is showing signs of becoming a wonderful contest.

The second day was both intriguing and fluctuating, largely played in glorious sunshine in front of spectators that first appreciated England’s resurgence with the ball, then enjoyed their growing momentum with the bat late in the evening.

England leaked runs in the morning before Wood seized the initiative with the support of the persistent Robinson.

Conway was able to eke 71 runs from the final two wickets, a roll New Zealand carried into the new-ball bowling until Burns and Root were able to build their partnership.

By the end, England had played themselves back into contention, albeit with New Zealand in the stronger position, especially when they are set to bowl last on a pitch that has suggested it will bounce unevenly later in the match.

Recent history is against England too. Not since 2011 have they conceded so many runs in the first innings of a home Test and gone on to win.

From 246-3 overnight, New Zealand tucked into the unusually ineffective Anderson and Stuart Broad, with left-hander Conway moving from his 136 not out with more crisp cover drives.

Wood was rapid on Wednesday, regularly in the mid-90s, yet an understandable drop in pace on Thursday was offset by a full length and clever use of the short ball.

Henry Nicholls was bounced out for 61 to end a stand of 174 with Conway, BJ Watling edged to second slip and Mitchell Santner pushed to mid-off.

Robinson, who took the catch to dismiss Nicholls, pinned Colin de Grandhomme leg before then had Kyle Jamieson brilliantly caught by a diving Crawley at deep square leg.

Conway, though, was unmoved, sharing a riotous last-wicket stand of 40 with Neil Wagner, whose stylish strokeplay included disdainfully lofting Broad over long-off for six.

Conway went to his double-century with a hook for six, only to be run out by Ollie Pope’s throw from the deep when attempting a needless second run. (Courtesy BBC)