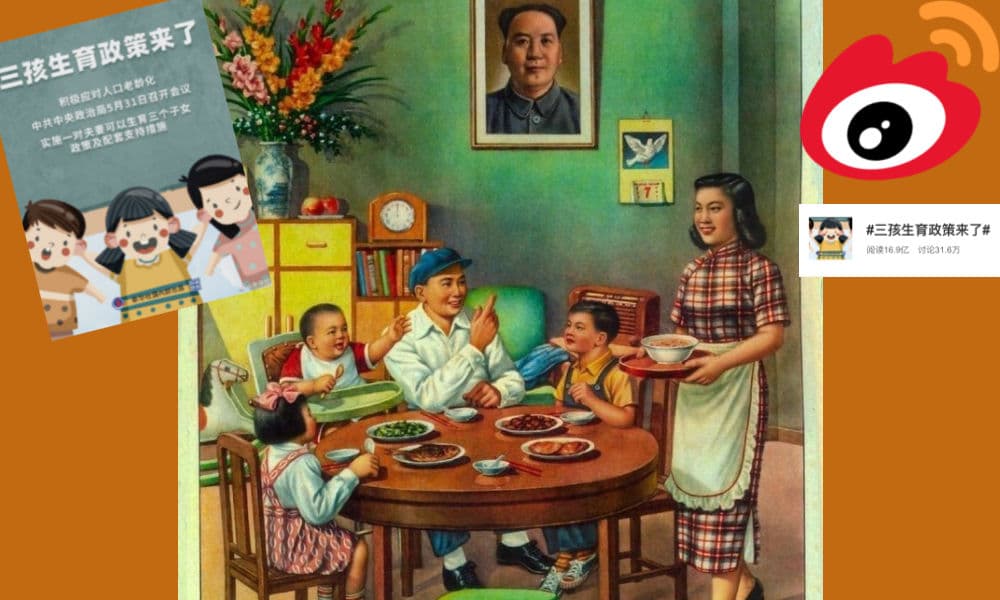 On May 31, after a meeting by the Politburo, Chinese authorities announced that all married couples would be allowed to have three children.

The announcement comes over five years after an earlier law came into effect allowing Chinese couples to have a second child. On Weibo, the topic immediately became top trending, with the Xinhua News hashtag page on the issue (#三孩生育政策来了#) going from 800 million views to 2.2 billion views within just an hour on Monday afternoon local time.

An illustrated image showing three small children was shared on social media by Xinhua, saying: “The three-child policy is here! Actively responding to the aging population, the Central Committee of the Communist Party of China convened a meeting on May 31 on the implementation of a policy allowing couples to have a third child and interrelated support measures.”

State media outlet China Youth Daily also published an image depicting two children playing on the floor, the text saying: “The three-child policy has come. They will have a brother or sister.”

Loosening policies and plummeting birth rates Facing a rapidly aging population, China has been loosening its previous ‘one-child policy’ for years. China initiated the one-child policy in 1979 with an aim to control the nation’s rapid population growth. It was successful in doing so: the government estimates that it prevented over 400 million extra births.

The policy has also been blamed for innumerable cases of forced abortions and mandatory sterilizations. Ethnic minorities or couples in rural areas were already allowed to have more than one child if their firstborn was a girl. Since 2013, couples were entitled to have a second child if they themselves were an only child. Richer families could also choose to have a second child and simply pay the high fine they would get for having another baby. In October of 2015, the Communist Party of China (CPC) issued an official statement that all couples would be allowed to have two children. That law went into effect on 1 January 2016.

Although the new policy led to a brief ‘baby boom’ – birth rates in China rose to their highest level since 2000 – the number still fell short of government estimation’s and the birth rates soon dropped again. In 2019, the birth rate of 10.48 per thousand marked the lowest number since 1949. More kids, more stress? When the shift from the one-child policy to a ‘two-child policy’ was announced in 2015, the expected change created a major buzz on social media. Although many people applauded the change in policy, there were also those who thought the end of the one-child policy came too late to counter the slow growth in population. ‘Many Chinese families cannot afford to have a second child,’ was one of the most recurring online comments at the time. For many Chinese couples, as only children, the everyday pressure of taking care of their elderly parents and carrying the financial burden for their own household was already very high. “We need more financial support from the government so that we can actually consider having a second child,” Chinese Weibo users said in 2015.

The introduction of a possible ‘three-child policy’ first became a trending topic on Chinese social media in 2018. In that year, Chinese bloggers and netizens denounced the potential measure in saying that an extension from a ‘two-child policy’ to a ‘three-child policy’ would add to the burden of Chinese women. Such a policy, they argued, would lead to Chinese women facing social expectations to birth a third child. And with supposed longer maternity leaves, they would also face unequal opportunities in the employment market. But it is not just about the financial burden and economic pressure. In a 2018 column for What’s on Weibo, writer Frankie Huang emphasized that China’s declining birth rates are often explained through an economic lens, while the social and historical background that has shaped the ways Chinese young parents think about family life today is perhaps more crucial in understanding people’s decision to postpone a second child or eschew one entirely.

“We must take into account how the One Child Policy made the single child family normative by erasing the experience of having siblings from the lives of millions,” Huang wrote. The ‘terrifying’ three child era Looking back at the online sentiments that dominated Chinese social media before, it is perhaps unsurprising that many commenters on social media platforms in China today are somewhat skeptical about the introduction of a ‘three child policy’ (三孩生育政策). A Weibo poll by Chinese state media outlet Xinhua asking “Are You Ready for the Three Child Policy?” was ridiculed by some when nearly 30,000 people replied “I am not considering it [three kids] at all”, with only a few hundred people indicating a more positive stance on the policy. The poll was apparently soon deleted.

Many people raise issues and concerns that come with having multiple children, including those related to the position of women in the employment market, the high cost of daycare, and children’s education. One popular comment even suggested that China’s post-80s and post-90s generations deserve to get a medal if they actually had three children, which would mean that – as only children themselves – they would need to look after four elderly parents, three young children, and then continue working while facing a gradually delayed legal retirement age. “The three-child policy is here, and it’s terrifying!” one popular female Weibo blogger (@Alex绝对是个妞儿) writes: “Many girls around me are already afraid to have one child, and I personally think having one is the limit – I didn’t expect the policy to be so ahead of its time! No kidding, if other supporting policies and guarantees are not in place, it will be very difficult to change women’s willingness to have children. It’s not that we don’t want to have children, it’s not that the policy doesn’t allow us to have children, it’s that once we have children, women’s lives will collapse and fall apart, and that’s what makes women not want to have children.” “This just gives my parents more reasons to pressure me to find a partner,” others complained. “This cracks me up. My monthly income is already barely enough to cover for me alone.” Besides those expressing concerns, there are also many jokes circulating online, such as a supposed Durex ad saying: “I’ll go, you guys have fun.”

In light of the new announcement, an older interview with Chinese businessman Shih Wing-ching (施永青), chairman of the Centaline Group, caused some controversy online when he suggested that Chinese couples should only be allowed to use contraception after having two children. According to the real estate mogul, it would be an effective way to solve China’s declining fertility rates. “It would be better for him to wear a condom around his brain to protect him from these bewildering thoughts,” one Weibo commenter suggested.

Another topic of public ridicule was the image announcing the ‘three child policy’ by Chinese state media outlet Xinhua for containing a typo, with the wrong character being used in the word 生育, “give birth to” (using 肓 instead of 育). “Shouldn’t we eliminate illiteracy first before letting people have three kids?” one Weibo user jokingly commented.

Despite all the criticism and online jokes, there are also those who are genuinely happy that having three children is now allowed for all couples. Recurring comments praise the freedom that comes with the loosening of family planning policies: “If you want to have more children, you can. If you don’t want to, you don’t have to.” One woman on Weibo wrote: “When the two-child policy was introduced, I soon became pregnant with my second child. Yesterday I was thinking if we could try to have a baby girl, and just like that, the ‘three-child policy’ is here!” (Courtesy whatsonweibo.com)