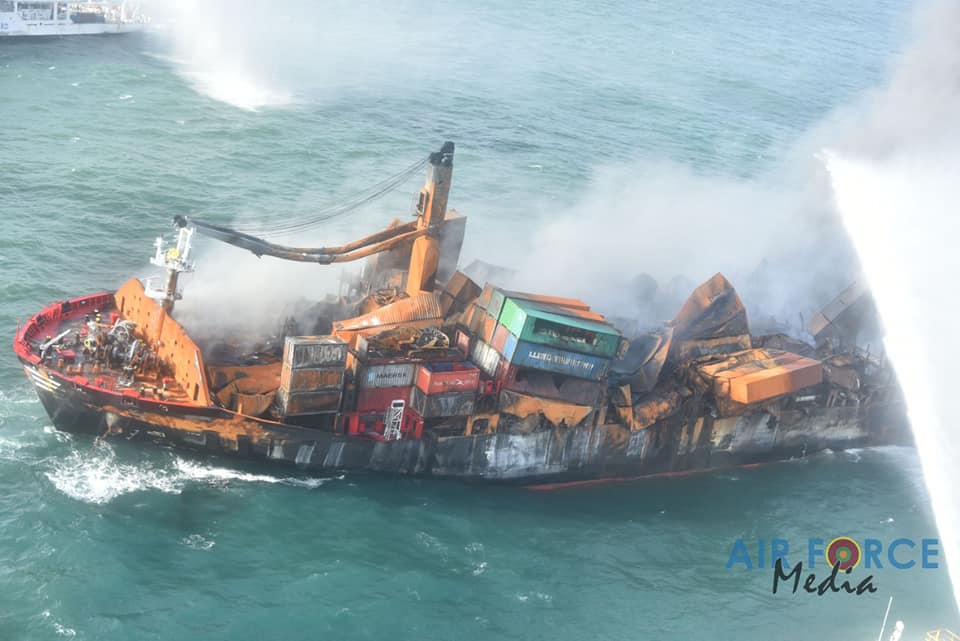 Sri Lanka is preparing to face a potential oil leak from the ship, X-Press Pearl, which began to sink earlier yesterday.

The Navy said that the coast guard together with vessels from India are now on standby to deal with the situation.

Navy Spokesman Captain Indika De Silva told Daily Mirror that as of late last evening one part of the ship was still above the water while the rest had sunk,

State Minister of Urban Development, Coast Conservation, Waste Disposal, and Public Sanitation Dr. Nalaka Godahewa told Daily Mirror that the ship was being towed further away from the Sri Lankan coast when one part of the vessel hit the seabed.

The authorities are now preparing to face an oil leak and minimize the damage it will cause.

Captain Indika De Silva said that a vessel capable of dealing with an oil spill was on standby.

X-Press Feeders, operators of the container ship X-Press Pearl, said that salvors were working with the local authorities and have established an oil spill response plan in case of any loss of oil.

The vessel was carrying 297 tonnes of heavy fuel Oil and 51 tonnes of marine fuel oil.

Dr. Nalaka Godahewa said that the Attorney General is to meet the stakeholders today (Thursday) to reach a conclusion on the compensation claim.

Dr. Godahewa said that there are various aspects to be considered before deciding on the full claim to be made.

He said the ship was sinking in Sri Lankan waters so the authorities can make an insurance claim as well.

The vessel is fully covered under internationally recognised P&I insurance and Hull and Machinery insurance.

The ship was heading to the Colombo Port when a container on the vessel caught fire in Sri Lankan waters.

The ship owners said that the vessel underwent discharge and loading operations at the  Hamad Port in Qatar and Hazira Port in India before continuing on its planned journey to Colombo.

X-Press Feeders said that applications had been made to both ports to offload the container that was leaking nitric acid, but the advice given was there were no specialist facilities or expertise immediately available to deal with the leaking unit.