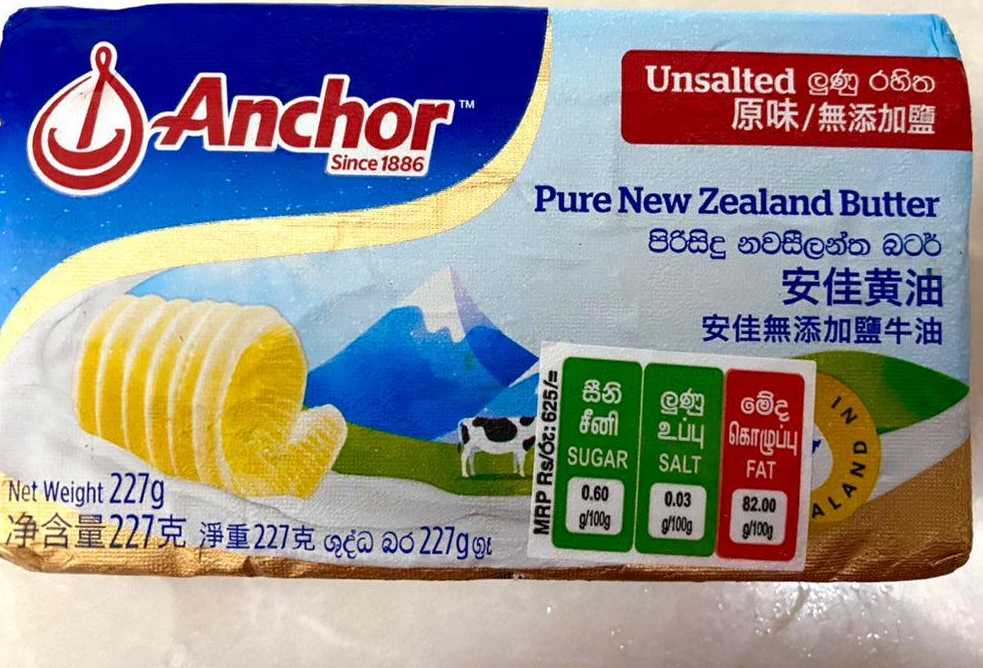 Fonterra Brands Lanka has defended the Anchor butter product packaging which does not carry wordings in Tamil but Sinhalese and Mandarin.

In an emailed response to Colombo Gazette, Fonterra Brands Lanka said that their Anchor butter product packaging is fully compliant with the packaging regulations of Sri Lanka.

“We understand and empathise with the recent concerns regarding the languages used on the pack,” Fonterra Brands Lanka said.

Fonterra Brands Lanka noted that Anchor butter is a multi-market product, made, packaged and exported from New Zealand to multiple countries in East and South East Asia.

“The same pack is made available to Sri Lanka. Hence, the product packaging includes the commonly spoken language in these respective countries. We respect diversity and place our customer requirements at the highest importance,” Fonterra Brands Lanka said.

Meanwhile, the Consumer Affairs Authority (CAA) of Sri Lanka said that a complaint has not been filed over the label displayed on the Anchor butter product.

The Chairman of the Consumer Affairs Authority Shantha Dissanayake told Colombo Gazette that no complaints have been filed in this regard as yet.

He said an inquiry will be immediately launched into the matter, once a complaint is filed by the consumer who had purchased the product.

Dissanayake said action will thereafter be taken against the perpetrators following discussions with the relevant CAA officers.

However, Fonterra Brands Lanka said that it had not violated any laws related to the CAA.

A consumer who had purchased the product had shared its image on social media, highlighting the continuous omission of the Tamil language in Sri Lanka.

Earlier, the Chinese Embassy in Sri Lanka was called out after several names and signboards at the Port City had omitted the Tamil language, and had replaced it with Mandarin.

Recently the Chinese Embassy and the Attorney General’s Department were also in the spotlight after a name board at the AG’s office for an electronic library constructed with Chinese funding had contained Mandarin, instead of the Tamil Language.

Several Parliamentarians, including Shanakiyan Rasamanickam, Senthil Thondaman, and Mano Ganesan have raised concerns about the repeated omission of the Tamil Language in Sri Lanka. (Colombo Gazette)