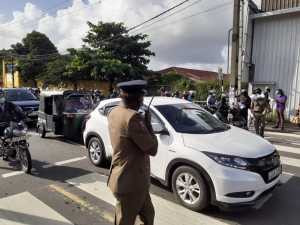 The Police today launched a special operation to paste stickers on vehicles approved to enter Colombo during the travel ban.

The sticker system has been introduced to monitor vehicles travelling under the essential services permit and to prevent officers from inspecting the same vehicle multiple times within Colombo. But if there is a special requirement, then the vehicles will be inspected repeatedly, DIG Ajith Rohana said.

The Police Spokesman said the stickers will be pasted on vehicles at one entry point after which they can continue to travel within Colombo without further inspection.

The Police have been forced to introduce such a system after unusual congestion was reported at the entry points of the Western Province, with many claiming to be employees of essential services, which is the only sector permitted to operate during the islandwide travel ban in place currently.

DIG Ajith Rohana requested the public to provide true and valid documents at roadblocks, and further called on them to cooperate with Police personnel. (Colombo Gazette)