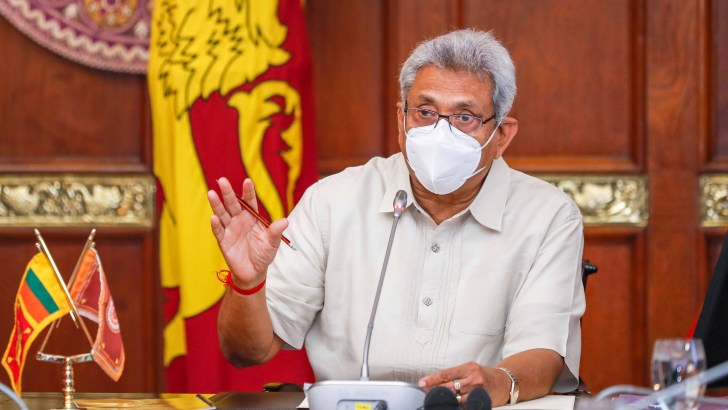 President Gotabaya Rajapaksa has instructed officials to ensure the economy does not collapse.

He called on the Governors and District Secretaries to extend their fullest support to the continuation of the operations at factories and development projects.

The President also said that Governors and District Secretaries should personally intervene to maintain essential services and prevent any disruption to the lives of the people.

The President expressed these views at the monthly meeting held with the Governors and District Secretaries at the Presidential Secretariat this morning (02).

The President pointed out the importance of looking into the possibility of operating a factory or carrying out a development project uninterrupted in compliance with health recommendations instead of shutting them down at once when an infected person is detected at a factory or a project premises.

The challenges and problems faced by the public in the face of travel restrictions was discussed at length at the meeting.

President Rajapaksa said that although the Government had given instructions to maintain industries and essential services in compliance with proper health recommendations, there were shortcomings in the implementation of this initiative at divisional level.

The President instructed that the mechanism for distributing surplus fruits and vegetables purchased from the farmers at the divisional level should be properly implemented. He stressed that it was the responsibility of all stakeholders not to allow the agrarian economy to collapse.

He said that projects that are being implemented with local funds and foreign loan assistance should meet the relevant targets properly.

The President also instructed the Governors and District Secretaries to maintain direct contacts with State Ministers and relevant Secretaries in order to ensure the implementation of Government launched projects including the rehabilitation of 10,000 tanks, development of 100,000 kms of rural roads, establishment of 1,000 National Schools and housing, regional hospital, drinking water supply and renewable energy development projects.

President Rajapaksa also noted that the vaccination process is currently being executed in a scientific and sophisticated manner and added that he expects further support from the political authorities as well as the Governors and all public officials when facilitating necessary assistance to the health sector to run the operation smoothly and swiftly avoiding any inconvenience to the people.

President Rajapaksa said that the Government has decided to provide organic fertilizer to farmers free of cost and requested the Governors to provide necessary assistance to overcome the challenges in promoting organic farming. It was also stated that the government has planned to provide aid and facilitate loans at a concessionary interest rate via state banks to small-scale businesses and farmers’ associations for the production of organic fertilizer.

The Governors commended the commitment of the Government led by the President in efforts to contain the current pandemic while safeguarding the lives of the people and in making the country’s future successful despite overwhelming odds.

The District Secretaries pointed out that the gazetting of ports, railways, customs, fuel supply, public transport services, banks and local government bodies as essential services has greatly assisted them to carry out their duties.

The Governors of the Provinces, Secretary to the President P. B. Jayasundera, Principal Advisor to the President Lalith Weeratunga and Government officials were also present at the discussion. (Colombo Gazette)