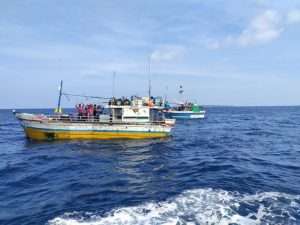 A temporary ban has been imposed on fishing between Negombo and Panadura by the Department of Fisheries.

State Minister Kanchana Wijesekera said vessels have been prohibited from entering through the Negombo Lagoon for fishing activities.

He said the temporary ban has been imposed with immediate effect as the fire engulfed X-Press Pearl vessel is sinking in its current position.

“The salvage crew that has boarded the vessel has indicated that the ship is sinking at its current position,” he tweeted.

He said the steps have been taken to contain the damage from any debris or an oil leak from the vessel.

The State Minister called on vessels fishing in and around the area, and in the high seas to remain vigilant of possible debris from the vessel in distress.

The MV X-Press Pearl which was transporting chemicals caught fire while off the coast of Colombo.

The Sri Lanka Navy said a special operation was launched today to tow the boat into the deep seas towards the West.

They also said the ship MV X-Press Pearl has begun to sink with water entering one part of the vessel. (Colombo Gazette)

Kanchana declares war on the electricity board