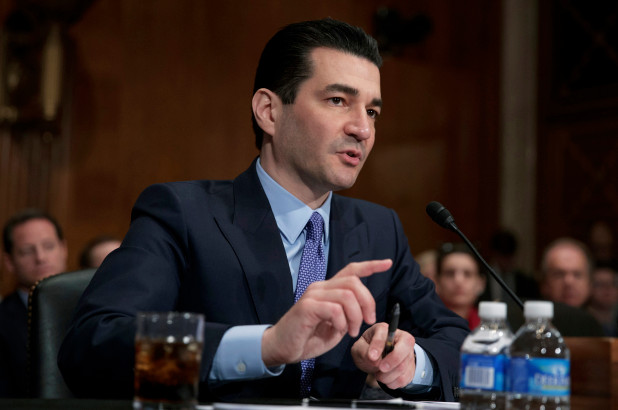 The former head of the Food and Drug Administration said Sunday that the argument for COVID-19 originating in a lab is strengthening — as he revealed such accidents “happen all the time.”

“Even here in the United States, we’ve had mishaps, and in China, the last six known outbreaks of SARS-1 have been out of labs, including the last known outbreak, which was a pretty extensive outbreak that China initially wouldn’t disclose that it came out of a lab,” Dr. Scott Gottlieb said on CBS’ “Face the Nation.”

In fact, Gottlieb said, there’s less evidence now that the novel coronavirus could have arisen naturally, eventually jumping from an animal to humans.

“We’ve done an exhaustive search for this so-called intermediate host, the animal that could have been a host to this virus before it spread to human, [and] we have not found such an animal,” Gottlieb, the FDA commissioner from 2017 to April 2019, explained.

“We’ve also fully disproven the market, the food market that was originally implicated in the outbreak as the source of the outbreak, so that side of the ledger probably has shrunken.”

The Chinese government could provide “exculpatory” evidence showing the virus that caused the pandemic didn’t leak from a lab in Wuhan, but they’ve yet to do so, Gottlieb said.

“China could provide evidence that would be exculpatory here,” he said.

Gottlieb, who sits on Pfizer’s board, said that since the lab was “poorly controlled” and performed “high-risk research” on SARS-like viruses, news that its workers became infected with novel coronavirus-like symptoms in fall 2019 adds credence to the once-maligned theory that COVID-19 leaked from the facility

“That side of the ledger has expanded and I think that’s why there’s renewed focus on this,” he said of the lab leak theory.

If the theory was determined by experts to be probable, the development could lead to heightened safety measures in labs where people conduct research on viruses, he said.

“It’s important to understand what the possibility is that this came out of a lab, so we can focus more international attention on trying to get better inventories about these labs, better security, make sure they’re properly built,” said Gottlieb.

But when it comes to knowing how to handle the spread of the virus, Gottlieb said knowing whether it started in a lab or in from animals wouldn’t change much.

But when it comes to knowing how to handle the spread of the virus, Gottlieb said knowing whether it started in a lab or was transferred from animals wouldn’t change much.

“There’s nothing that we’re going to learn about the characteristics of the current virus by knowing its origin, quite frankly. We’ve had enough experience with this virus to fully understand it.”

Gottlieb’s comments come as Republicans and Democrats in the House of Representatives are pushing bills to investigate the virus’ origin.

Three researchers at China’s Wuhan Institute of Virology in November 2019 came down with “symptoms consistent with both Covid-19 and common seasonal illness,” The Wall Street Journal reported on May 23. (Courtesy New York Post)