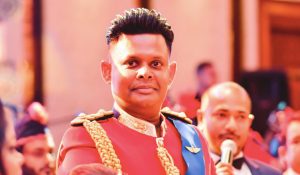 The driver of event organizer Chandimal Jayasinghe has been fined over a traffic offence committed yesterday.

Chandimal had been en route to his residence along with his driver after being granted bail for violating the quarantine law by holding a party to celebrate his birthday at the Shangri- La Hotel in Colombo on Sunday night.

His driver is reported to have disregarded a pedestrian crossing and had driven recklessly. The incident had been widely circulated on social media, after which the Police had launched an investigation.

DIG Ajith Rohana said the Police had thereafter arrested the driver today and had taken custody of the vehicle as well.

The suspect had been produced in court on charges of reckless driving and disregarding a pedestrian crossing.

The Police Spokesman said as the suspect had pleaded guilty, the court had imposed a fine of Rs. 12, 500 and released him. (Colombo Gazette)

Another six who attended party sent to quarantine facility

More arrests to be made over hotel party