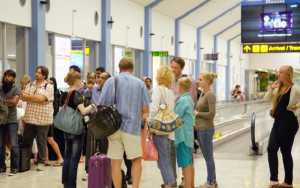 Over 550 passengers, including 19 tourists arrived in Sri Lanka this morning (Tuesday).

They were among the first group of passengers to arrive after Sri Lanka reopened its borders today (1st June).

Chairman of Airport and Aviation Services, Major General G. A. Chandrasiri told Colombo Gazette that six flights have arrived in Sri Lanka since the reopening of the airport at midnight yesterday.

He said one flight had arrived from Qatar, and the remaining flights were operated by national carrier SriLankan Airlines.

A total of 569 passengers had arrived in the six flights that landed in the country this morning.

Major General Chandrasiri said among them, 19 passengers have arrived under the tourist bubble, and this could increase later.

He added that the remaining passengers were largely Sri Lankans who were repatriated mainly from the Middle East after being stranded due to the coronavirus pandemic.

Sri Lanka had temporarily closed its borders from the 21st-31st of May due to the rapid spread of the third wave of the coronavirus since April.

All passenger arrivals, including transits, were prohibited during this period.

Despite reopening the airports, Sri Lanka has imposed a travel ban on passengers from Vietnam and India, including transits.

The Airport and Aviation Services said any passenger who has been to Vietnam or India in the past 14-days will not be permitted to disembark in Sri Lanka.

However, passengers from other countries arriving in Sri Lanka will be required to undergo the mandatory quarantine process of 14-days. (Colombo Gazette)

Another 160 people detected with Omicron in Sri Lanka