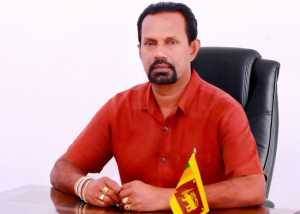 The Moratuwa Magistrate’s Court rejected the motion after taking it up for consideration today.

Moratuwa Mayor Saman Lal Fernando was arrested for behaving in an unruly manner during a COVID-19 vaccination drive organized in Moratumulla on 28th May.

The Mayor was arrested after surrendering to the Mount Lavinia Police on the following day.

He is accused of obstructing the duties of a medical officer who was engaged in the vaccination programme held at Moratumulla.

The Mayor is reported to have instructed the medical officer to inoculate those he had issued tokens to, his close associates, and not those who have gathered to obtain the vaccine.

Saman Lal Fernando, who is a member of the ruling Sri Lanka Podujana Peramuna (SLPP), was arrested after surrendering to the Police and was later remanded till the 11 of June.

President Gotabaya Rajapaksa also slammed the incident during a recent meeting of the Covid Task Force, stating that the incident was ugly and put a black mark on the successful vaccination program being conducted in Sri Lanka. (Colombo Gazette)