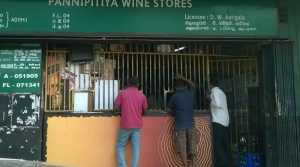 All liquor stores across the country will be sealed until the islandwide travel restriction imposed in Sri Lanka is lifted, the Excise Department said today.

Spokesman to the Department Kapila Kumarasinghe told Colombo Gazette that the stores will be sealed with immediate effect.

Kapila Kumarasinghe said the measure has also been taken to ensure that those with liquor licences do not open the stores under their own discretion during this period.

The Excise Department spokesman said the decision has been taken as a precautionary measure.

All liquor stores in the country have been closed since the imposing of an islandwide travel restriction from the 21st of May to the 7th of June.

The travel restriction has been enforced to curtail the rapidly spreading third wave of the coronavirus in Sri Lanka. (Colombo Gazette)

Senthil proposes scrapping Covid relief to those who buy liquor

Online sale of alcohol not approved