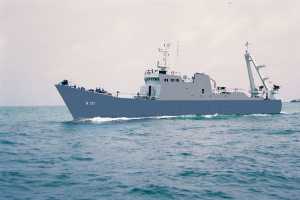 A large stock of weapons fell into the sea off Galle, the Sri Lanka Navy said.

Navy spokesman Captain Indika de Silva told Colombo Gazette that the incident had occurred when weapons were being transferred onto a vessel that was anchored off the coast of Galle.

He said a boat from the port service providers of the International Maritime Company had loaded weapons onto a vessel that was en route to the Red Sea.

The service boat was moving the weapons onto the ship when the net had snapped due to rough seas, resulting in a stock of weapons falling into the sea, the Navy spokesman said.

Captain de Silva said 36 weapons and a stock of ammunition have fallen into the sea.

He said the Sri Lanka Navy which was supervising the process has launched a search operation to locate the weapons and stock of ammunition. (Colombo Gazette)

More people trying to migrate to Australia by boat detained

Navy detains 54 people attempting to migrate to Australia by boat

Navy detains another 64 people attempting to migrate by boat