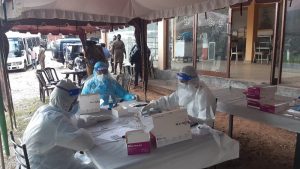 At one-level, the discourse may sound too late in the day, but the question is still relevant if the government could have saved the day for the nation on the Covid-19 front if it had declared a national emergency when the second wave began spreading. Instead, it went on a denial mode of sorts initially, then moved up the scale to complete lock-down throughout the country, in bits and pieces, but that only ended in more deaths and misery, all the same.

Sri Lanka took credit for clamping down on the by-now-forgotten first wave because of the clamp-down. The political Opposition, and more so, the so-called civil society complained, and complained, too much, that uniformed men on the streets were harassing them and attacking them, too, as if they were all enemies of the nation, like erstwhile JVP insurgents or LTTE terrorists.

That was before the parliamentary polls last year. At the end of it, when regional statistics showed that the nation had the lowest death-rate and had also controlled the pandemic-spread effectively, kudos went the way of President Gotabaya Rajapaksa for being tough like a disciplinarian-parent. Before that there were motivated rumours that the deployment of the armed forces for Covid-control and making army commander, Gen Shavendra Silva, to lead the nation’s pandemic-fight on the ground was aimed at institutionalising autocracy, if not military rule proper. But after the way in which Silva and team did their job effectively, even the worst critics of the government and the President could not pay them accolades – some of them within themselves.

What then went wrong with the control of the second wave, when local experts and international organisations like WHO had warned that it would be worse than the earlier one, which was possibly a trial-run or a warning-bell, and nothing more? And now we have yet another warning-call that there could be a global third-wave, too, and that makes things that much more difficult for the nation and its people than is imaginable even at the height of the terrorism of the kind that Sri Lanka had witnessed until only about a decade.

Clearly, the government slackened. Like many other global and regional governments, it possibly did not take the experts’ warning seriously, even while supposedly believing it all the same. Team Gota was keen to set right people’s right, both before and after the all-important parliamentary polls – and not just for political reasons.

A hand-to-mouth economy could not have afforded it in ordinary circumstances. Gota government’s inheritance was nothing worth writing about, at least on the positive side. This meant that the government seemingly thought that they could wait until the second wave hit home, and they may have a window of opportunity to put back at least a few economic building blocks back in place.

It was akin to the common man rushing to the market to fill in his kitchen stores with every lock-down notification. In this case, by crowding the markets, people were spreading the pandemic. They were also getting infected. It happened in a much, much larger scale between the two pandemics, and for the nation and its economy as a whole.

The government has to acknowledge the truth that Silva’s men were less tough on the ground ahead and during the second wave. It may have also owed to the fact that the first wave had recorded victims among the uniformed forces when the first wave hit. There is a perception in most nations deploying policemen or armed forces personnel on corona-control measures on the streets that these men are hit equally hard.

Either they get it from the streets and spread it to family members back home, or had to be in ‘self-quarantine’ inside their own houses, at the end of the day, week or whatever. For the men and also their families, it was like house-arrest of the uniformed personnel, and that was not on.

Somehow, in between, a belief too seemed to have arisen that corona can’t touch those men that had triumphed over LTTE terrorism. When that belief got broken and turned into smithereens, naturally the morale of the men involved also went low at that point. In turn, it contributed to less effective curbs-control on the streets.

Former Prime Minister Ranil Wickremesinghe has since called upon the government and the Opposition parties to come up with a national agenda to confront the corona pandemic. The problem across the world through the past year is that very few governments have taken their own political Opposition into confidence, and have sought their inputs for drawing up an effective programme in the matter.

Sri Lanka was/is not an exception. The government of President Gota Rajapaksa, with Prime Minister Mahinda R with his vast administrative experience as both President and Prime Minister in the past, seemed to have got its priorities wrong. And that too seemed to have shown up on the streets across the country – at times travelling in the nation’s sea territory, too.

The timing and the rush-hour passage of the Colombo Port City Economic Commission Bill, through the Supreme Court and Parliament, shows where the mind of the political leadership got fixated in between. So was the police and armed forces taking crucial time-off, to check against the ‘Mullivaikkal memorial’ anniversary. It was only proper to do so in this pandemic environment, but using it as a cover for vandalising the memorial site showed who was spending more time on thinking out ways, and at what priority.

All this have put the nation on the back-foot when it comes to bidding bye to the second wave of the pandemic. The question also arises simultaneously, if the government and the people are ready for a third- wave, at least, learning their lessons from the first two. Between them, yes, the two have sent out confusing signals.

Erring on the right side may be the right approach than risking it all on the wrong side. It is here that Wickremesinghe’s suggestion merits all the attention and consideration. It will at least help the government tide over suspicious charges of profit-making, care of the Covid. Its effects will linger on until after the next round of elections, like the Central Bank bonds scam was for the previous government. But cheating in the name of business is one thing, but cheating even in the face of an unprecedented calamitous pandemic is another. Or, at least that is how the voter is likely to look at it all.

On the issue at hand, there is a denial that Sri Lanka did not buy China’s Sinopharm vaccine at a higher price than Bangladesh ($ 15 – $ 10). The denial in this connection too has come not from the government, but the Chinese Embassy in Colombo. Leave aside the propriety involved, sooner than later, people may begin attaching as much credibility to the Chinese Embassy statement as they do with their successive political leaderships.

It is the kind of credibility-slack that led to local populations in many countries – democracies or not — raising against their American/Soviet military presence on their soil, leading to their hurried exit in many cases. The absence of a military base does not mean that China could escape it. The embassy seems to be making up for it, quick and fast.

It is here, Wickremesinghe’s suggestion for building a national consensus could help. No certainty, of course, about the results, all the same. But today, the nation is like the man in deep waters who can hold on to a clutch of straw and pray for deliverance to arrive.

Such an all-party team could involve political parties represented in Parliament, of course. It can also have a consultative committee or whatever, which can comprise not only experts and representatives of delivery personnel but also former health ministers from the forgotten Provincial Council. Some of them may have had grassroots-level contact that many ministers at the national-level ever had. All their energies and identification were mostly with their own electorates, or a part thereof. It won’t work in a nationally calamitous situation.

The government, rather, the all-party committee could consider either as a regular or an interim measure, the proclamation of ‘health emergency’ of some sorts, even if only for a month or two, with of course, Parliament having to be involved at the end of each month, as mandated by the Constitution.

The temptation for a section of the ruling party that they may have a two-thirds majority and need not have to take the Opposition into confidence may run high. But if nothing else, they should be happy to look around for people who could share the blame for wrongs and failures. In such a scenario, it needs to be tested if the Opposition wants any part thereof, as suggested by Wickremesinghe, that too at this late hour.

If nothing else, Wickremesinghe regime’s two-time Emergency proclamation helped save the situation, whatever be its failures on multiple fronts otherwise. One was after ethnic violence in Kandy, preceded by one in Batticaloa. The other was after the ‘Easter serial blasts’, the only one and the biggest thus far, post-war, post-LTTE.

True, the pandemic does not respect governments. Then US President Donald Trump learnt it the hard way. But here in Sri Lanka, the proclamation of the Emergency on the two occasions did help discipline the people and helped them to distinguish between sense and nonsense. Though not mandatory, there is no harm in the government, that too through the mechanism of an all-party committee, discuss and decide upon ‘health emergency’ of whatever kind and duration agreed upon. Still, it would have been only a small beginning in the nation’s future wars with the pandemic and its long-drawn ill-effects on the people and the economy, among others.