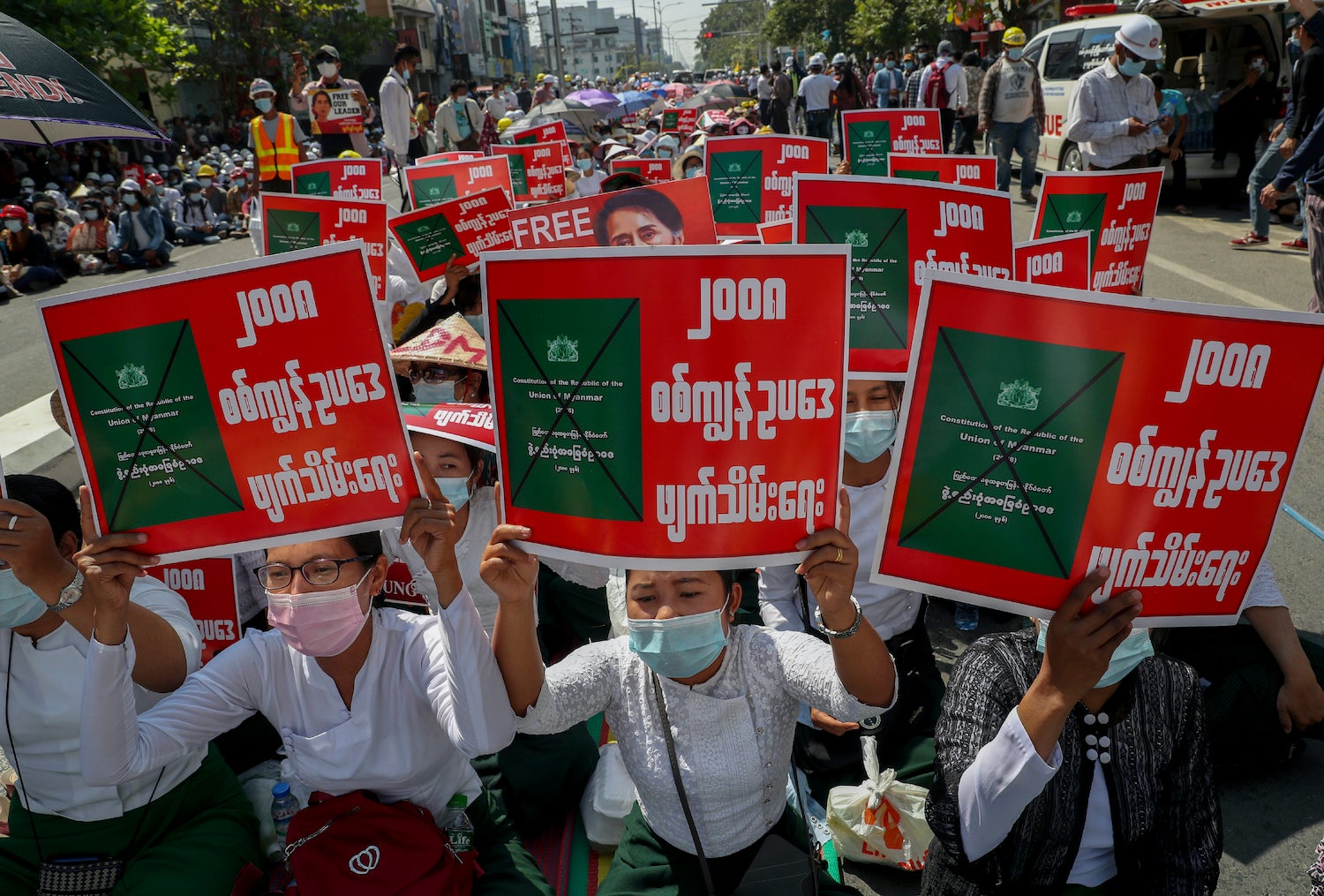 The tendency towards authoritarianism, the flagrant disregard for painstakingly agreed rules and conventions of international order, the denigration of human rights across wide and dispersed geographies, and the seeming inability of those tasked with preventing these to do so has meant that events such as the hijacking of international aircraft by the State and the killing of dissidents on foreign shores, to name just a few, have today begun to appear commonplace.

The United Nations (UN) and its various organs and some influential democratically oriented countries have been expressing their indignation every time something abhorrent occurs and imposing some sanctions that do not seem to hurt the offending parties enough to make them change their ways, and not much else. Either the will to stem the rot that is fast setting in is absent or the available leverages are ineffectual. Both scenarios do not inspire confidence, and the fact that the international space is more divided today than it has been in decades compounds the problem.

What this means is that unless the UN and the responsible sections of the international community undertake to assert themselves and exact a heavy enough price for grave violations so as to render them unviable for violators, they stand a genuine risk of becoming largely irrelevant and ignored.

Myanmar, since the 1 February coup, has provided a compelling opportunity for the UN and the international community to regain lost ground, and indeed lost prestige. Already justifiably accused of genocide against the Rohingyas, the overthrow of the democratically elected government and the overbearingly violent repression of the country’s own protesting citizens gave the international community persuasive reasons to get involved in reining in the military junta. Almost four months after the coup, all that has happened while thousands have died in Myanmar is that as always statements in condemnation have been issued and sanctions of debatable impact have been imposed.

As Widad Franco, UN Coordinator of Human Rights Watch, wrote on 24 May, “The United Nations Security Council, entrusted by the UN Charter to be the world’s guardian of international peace and security, has done little to help the people of Myanmar besides issuing statements asking the junta to end the violence and release prisoners… Inaction by UN member States will only embolden Myanmar’s military and encourage more abuses”. The junta, meanwhile, buoyed by opinions penned by influential international figures advocating normalization of relations with it, and bolstered by firm support from both China and Russia, has dismissively swatted aside these criticisms and sanctions. The junta has thrown down the gauntlet, it remains for the international community to respond and show that it counts, or meekly wither away and leave autocrats, dictators and their ilk to their own merry ways.

The situation within Myanmar has been on the boil. The Thailand-based rights group Assistance Association for Political Prisoners (AAPP) revealed that at least 827 people have been killed by the junta since 1 February, and 4313 are in detention. This contrasts sharply with what the kingpin of the coup and the present de facto leader of Myanmar, Min Aung Hlaing, told the Hong Kong-based Chinese language broadcaster Phoenix Television in his first interview with foreign media since the coup. He claimed that only about 300 people had been killed in the unrest, and that included 47 police personnel. Hlaing also dismissed the suggestion that a civil war looked imminent in Myanmar by saying simply, “I don’t think there will be a civil war”. UN Special Rapporteur Christine Schraner Burgener had said on 24 May that a civil war could erupt in Myanmar if anti-coup protesters changed their defensive position to an offensive one as the junta escalated violence against them.

Despite Hlaing downplaying the situation, the Myanmar military is actually having to fight on a growing number of fronts, ranging from the political protesters to established ethnic minority armies and local militias formed in the past few weeks, many armed with rudimentary rifles and home-made weapons. Christine Burgener termed the military’s attempt to ban the National League for Democracy (NLD), the party which won 82% of the vote in last November’s election, “unacceptable” and echoing the party’s leader Aung San Suu Kyi said, “I also hope the NLD will survive because this is the will of the people”. Burgener added that every day “explosions” happen anywhere, which is scaring the people. She asserted that the UN was trying to stop the violence, adding “Clearly it’s sad to see that people have to use arms”. Referring to the People’s Defense Force that local citizens have formed with the pro-democracy National Unity Government, she stressed on the need to “try and bring them under a single command structure”.

In recent days, fighting has intensified in eastern Myanmar near the border of southern Shan and Kayah states, with dozens of security forces and local fighters killed and thousands fleeing their homes. Burgener said that ethnic armed groups had told her in meetings that they support the people and now have “a common enemy”, but she added that it was difficult to see how their mainly home-made weapons can square up against “a very strong army who have a lot of lethal weapons”.

Burgener informed that over the past three weeks she had discussed with many key parties the idea of starting an inclusive dialogue that would include ethnic armed groups, political parties, civil society, strike committees and the Myanmar army, as well as a small group of witnesses from the international community. She added, “Clearly it will not be easy to convince especially both sides to come to a table, but I offer my good offices … to avoid more bloodshed and civil war which would last a long time… We are worried about the situation and clearly we want that people on the ground … decide how they want to see the country going back to normal”.

Judging from the fact that the UN Special Rapporteur has had to set up shop in neighbouring Thailand, and is not based out of Naypyitaw, says a lot about the limited clout the world organization has in the context of Myanmar. Burgener’s revelation that Hlaing had responded to her request to visit Myanmar by saying “still it’s not the right time” shows the restrictive milieu that she is having to navigate. An increasing number of pro-democracy protesters in Myanmar, meanwhile, have begun calling for implementation of Responsibility to Protect (R2P), a UN norm that has existed since 2005. As Clara McMichael described it in a recent article in Slate, R2P is a UN principle that is used when the government of a country fails to protect its own citizens from genocide, war crimes, ethnic cleansing or crimes against humanity — in many cases the government itself is the perpetrator of those crimes. In these situations, the UN can take collective action through the Security Council on a case-by-case basis to protect civilians, even if the government does not consent and the action violates the country’s sovereignty. In view of the rising demand for such a move in Myanmar, the UN held a plenary meeting on the topic of R2P on May 17. This effort is, however, not likely to yield much given that a similar call for R2P over the genocide of the Rohingyas had in 2017 been blocked by Russia and China.

The prospects of a fair resolution to the Rohingya issue, meanwhile, took a serious turn for the worse this past week when Min Aung Hlaing, who not long after the February coup had said that efforts to repatriate refugees from Bangladesh would continue, changed tack completely in the interview with Phoenix Television. When asked whether the Rohingyas could be allowed back into Rakhine State, from where they had fled, he said, “If it doesn’t comply with Myanmar’s laws, what else is there to consider? I don’t believe there is any country in the world that would go beyond their own country’s refugee laws to accept refugees”. When asked whether that meant vocal international appeals on behalf of the Rohingyas were to no avail, he nodded and then put forth the oft used allegation that the Rohingyas are not one of Myanmar’s ethnic groups even if some Rohingyas could trace their roots in Myanmar back for centuries. Over a million Rohingya refugees are sheltering in camps in neighbouring Bangladesh, unsure if they will ever be able to go back home.

As the situation in Myanmar spirals downward, clever suggestions are being proffered by some influential elements to broker a status quo that lets the Myanmar military continue to rule. Playing on the heightened concern over China that has awakened in the Western world, Yusuke Watanabe, the secretary general of the Japan-Myanmar Association, argued in an article in The Diplomat that “Japan must position itself as a bridge between the Tatmadaw (Myanmar Army) and the United States and other democratic countries rather than blindly aligning itself with the Western policy of regime change… Finding a solution to Myanmar’s present crisis begins with deference to the country’s history and economic development of a political environment conducive to democratization rather than external imposition of foreign values”. The association had been founded by Yusuke’s father and Japanese politician Hideo Watanabe, Tokyo’s point man for economic relations, to rally support for Japan’s investments in Myanmar. He had a long track record of working closely with the junta, including with Min Aung Hlaing.

Yusuke Watanabe makes no bones about his own personal proximity to Hlaing, writing about his “recent dialogue with Senior General Min Aung Hlaing”. He also takes a matter-of-fact approach to conveying that Hlaing had “personally reaffirmed his commitment to restoring a civilian government in the future”. Yusuke’s “vision for Myanmar’s future” consisted of “patient engagement with the Tatmadaw and continuous economic development conducive to eventual democratization”. In other words, his prescription is that the world ignore the waves of serious humanitarian crises created by the Myanmar Army and transact business with it as usual till the military becomes prosperous enough to handle democracy. This argument for glossing over the junta’s misdeeds is as vain as Yusuke’s contention that “the West has been indefatigably pursuing to its own detriment the questionable strategy of regime change supposedly for Myanmar’s democratic future. Such an approach reflects at best irresponsible disregard for Myanmar’s history and at worst incorrigible strategic folly. In fact, Myanmar’s democratization efforts for the last decade have inadvertently intensified the country’s ethnic tensions and even allowed China to dramatically expand its clout, ironically thanks to its budding relationship with Aung San Suu Kyi… Ironically, the Tatmadaw’s hostile takeover of Naypyidaw on February 1 has put the future of China’s geo-economic projects in limbo… Indeed, as Naypyidaw increasingly pivots to Russia and other autocratic powers for strategic positioning, Japan remains the only democratic country preserving its historical ties to Myanmar’s military government. Leveraging its decades-long economic cooperation, Japan can now directly work with the Tatmadaw to reverse China’s geo-economic influence by supporting strategic infrastructure projects”.

The United States and other democratic countries that Yusuke refers to need to guard carefully against falling into traps such as the one that this Japanese benefactor of the junta has attempted to lay down to lure them. The threat posed by China cannot by itself be allowed to override and cloud the atrocities being meted out by the junta and the hundreds of lives that are being needlessly lost. Human rights and liberties have been thrown to the wind for long enough, they desperately need to be reeled in.

The international community must recognize that it is not just the rights, the well being and the future of the Burmese people that is at stake, the credibility of the entire international order as it exists now is also at the crossroads and will be directly impacted by how Myanmar is handled. (Courtesy EFSAS) (W-News)