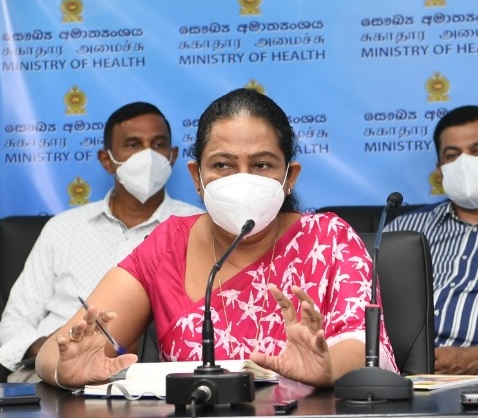 The Ministry of Health has said that it had not sanctioned the inoculation program of the second dose of the Covishield Astrazeneca vaccine at the Abhayaramaya Temple in Narahenpita.

Health Minister Pavithra Wanniarachchi told reporters that they received reports that a large number of people had gathered at the temple demanding the vaccine.

She said there was a threat of the coronavirus spreading among the crowd outside the temple.

As a result, she said the Health Ministry dispatched some vaccines to inoculate the public and bring the situation under control.

Wanniarachchi said that the remaining stocks of the Covishield Astrazeneca vaccine have been reserved for kidney patients and cancer patients.

The second dose of the Astrazeneca Covishield vaccine was administered at the Abhayaramaya Temple in Narahenpita yesterday (Sunday)..

According to reports, the vaccine was administered based on a list obtained by the temple.

Several people, including Buddhist monks received the second jab at the temple.

A tense situation also arose outside the temple when some people were refused entry.

Public Health Inspectors (PHI) recently launched a strike after members of the Government Medical Officers Association (GMOA) had allegedly administerd some of the remaining Astrazeneca vaccines to their kith and kin.

The Government is desperately looking for another 600,000 doses of Astrazeneca vaccines to administer to those who got the fist jab. (Colombo Gazette)