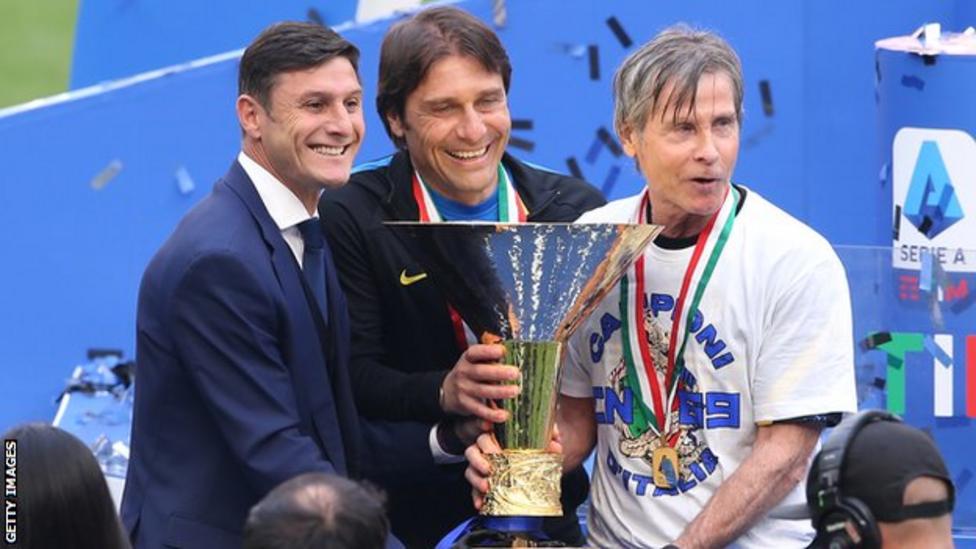 Antonio Conte has left his role as Inter Milan manager – three weeks after leading the club to a first Serie A title in 11 years.

The 51-year-old Italian spent two years in charge of Inter and had one year remaining on his contract.

In a statement, Inter thanked Conte for his “extraordinary work” at the club.

Conte has recently been linked with Real Madrid, amid speculation Zinedine Zidane will leave this summer, and the vacancy at Tottenham.

Inter added that the decision to terminate the former Chelsea manager’s contract was mutual.

Despite helping Inter end Juventus’ dominance of the Italian top flight, there has been speculation over Conte’s future at the club for months.

Inter’s owner, the Chinese retail group Suning, is reportedly suffering financial pressure which is expected to lead to cost-cutting at the club and player sales this summer.

Former Juventus manager Massimiliano Allegri and current Lazio coach Simone Inzaghi have both been named by the Italian press as potential successors to Conte.

Inter had finished 21 points behind Juventus in the season prior to Conte taking charge.

But several high-profile signings including Romelu Lukaku, Christian Eriksen and Ashley Young had a transformative effect in his first season at the helm.

Inter reached the Europa League final and ended up just a point behind Juve in 2019-20, serving a warning of what was to follow this term.

A superb domestic campaign saw Inter claim their 19th Scudetto with four games remaining, while their points tally of 91 is the second highest in the club’s history after the 97 they amassed in 2006-07.

It also means that Conte, who won three Serie A titles with Juve, is the only manager to have gained 90 points or more with two different sides since three points for a win was introduced in the Italian top flight in 1994. (Courtesy BBC)