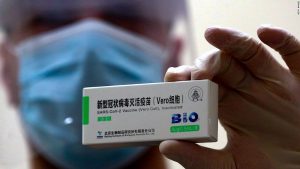 The Government has allocated 375,000 doses of the Sinopharm vaccine to administer the second jab.

Army Commander General Shavendra Silva said the doses will be allocated from the second batch of the Sinopharm vaccines received from China yesterday.

He said the remaining 125,000 doses from the consignment of 500,000 vaccine doses will be used to administer the first dose in three other Districts.

General Shavendra Silva said the vaccine drive will be rolled out next in the Galle, Matara, and Kurunegala Districts.

Another 500,000 doses of the Sinopharm vaccines arrived in Sri Lanka from China yesterday.

Sri Lanka earlier received 600,000 doses of the vaccine from China as a donation.

It was later administered to the public after it was approved by the World Health Organisation and the National Medicines Regulatory Authority (NMRA). (Colombo Gazette)