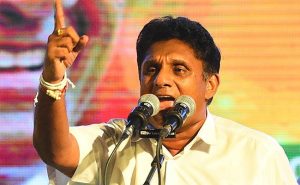 Ten staff members attached to the Opposition Leader’s office in Parliament have tested positive for Covid-19.

Sergeant-at-Arms of the Parliament of Sri Lanka Narendra Fernando told Colombo Gazette that the infected staff members had been detected after PCR tests had been conducted on a group of Parliament employees.

He said the PCR tests were conducted on those who had come into contact with infected Parliamentarians from the Opposition.

Narendra Fernando said that no other Opposition or Government Parliamentarians have contracted the virus, apart from two MPs from the Samagi Jana Balawegaya (SJB).

Opposition Leader Sajith Premadasa announced last week that he and his wife had contracted the coronavirus.

Sergeant-at-Arms of the Parliament of Sri Lanka Narendra Fernando said ten MPs from the Opposition and three Parliament staff members were told to immediately isolate themselves.

SJB General Secretary MP Ranjith Madduma Bandara told Colombo Gazette that all party members have isolated themselves as they had attended meetings and Parliament proceedings with the infected MPs.

He said MPs Kabir Hashim and Lakshman Kiriella have so far tested negative among the SJB members. (Colombo Gazette)

Officials appearing before COPE to be asked to take an oath

Parliament to convene for only 2 days this week