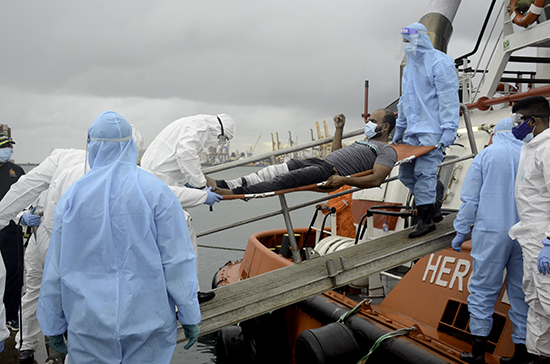 A crew member of the ship on fire near Colombo has tested positive for the coronavirus.

The crew member of the MV X-Press Pearl is receiving treatment at the Colombo National hospital.

Two crew members from among 25 who were rescued from the vessel yesterday (Tuesday) were admitted to hospital.

PCR tests conducted on the crew members confirmed that one had contracted the coronavirus.

The Sri Lanka Navy, Marine Environment Protection Authority (MEPA), and others are attempting to contain the fire which broke out on Friday (21).

The vessel was en route to Colombo from Gujarat, India, and was reportedly carrying 14 containers of chemicals. Most containers with toxic material have fallen into the seas off the coast of Colombo.

State Minister Kanchana Wijesekera said debris and cargo that had fallen off the vessel have been spotted along the beach in the Kapungoda and Seththapaduwa areas in Negombo, by local fishermen this morning.

He said a cargo container has also been spotted at around 4 am in the same area, adding that the fire continues to rage on the distressed ship.

The Navy, Marine Environment Protection Authority (MEPA), Fisheries Department, Indian Coast Guard, and other authorities are working to contain the oil spill from the vessel, the State Minister said.

Kanchana Wijesekera further said the authorities were deploying oil containment booms around the vessel and around the Negombo lagoon.

He urged the public not to visit the beach along the coastal belt from Colombo to Negombo.

Meanwhile, the Marine Environment Protection Authority (MEPA) has warned the public not to touch or open any of the debris or cargo washed ashore from the MV X-Press Pearl.

MEPA said the public has been advised so as the debris and packages could contain harmful toxic material.

Bell 212 helicopters deployed by the Sri Lanka Air Force (SLAF) have dropped 425kgs of dry chemical powder this morning in a bid to extinguish the fire on the vessel.