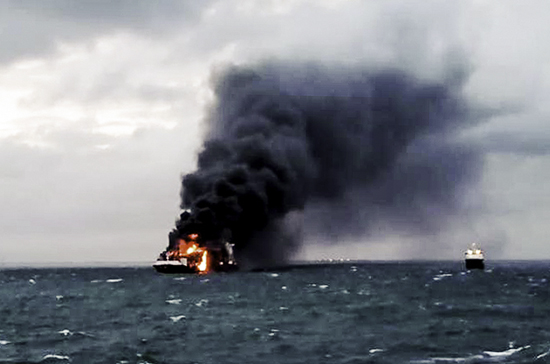 Packages or debris containing toxic material from the distressed vessel off the coast of Sri Lanka may reach the shore around Colombo or Negombo, authorities warned.

Assistant Director of the Disaster Management Centre (DMC) Pradeep Kodippili said the Marine Environment Protection Authority (MEPA) has requested the public to refrain from touching or opening the packages.

He said MEPA has urged the public to inform the Police, tri-forces or contact the DMC hotline on 117 if they come across any of the toxic material or debris.

Kodipilli said eight cargo containers consisting of chemical materials have fallen into the sea after a fire had reignited on the vessel due to an explosion.

The vessel is currently 9.5 nautical miles off the coast of Colombo and measures are being taken to contain the fire.

The Marine Environment Protection Authority said that the eight cargo containers that had fallen into the sea are floating between the Kelani and Maoya rivers and are close to shore at present.

Kodipilli said the tri-forces and DMC officials are on standby to face the situation in the event the cargo floats towards the coast off Kalutara.

He further urged parents along the coastal belt of the Western Province to ensure that their children do not venture towards the sea during this period.

Twenty-five crew members were rescued from the vessel after the fire reignited today, while two Indian nationals among them were hospitalised after sustaining serious injuries. (Colombo Gazette)