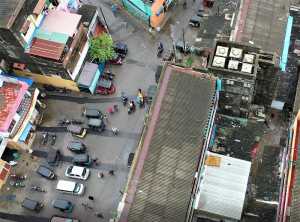 More people have been arrested during drone operations conducted by the Police in several parts of Colombo.

He said 12 people were arrested for violating the travel restrictions that were in effect during this period.

DIG Ajith Rohana said drone operations will be conducted today as well, despite the travel ban being relaxed between 04 am to 11 pm.

The Police Spokesman said the operations will continue to monitor if the public are adhering to the quarantine regulations.

Meanwhile, another special operation was also carried out yesterday to inspect three-wheelers travelling within the Western Province, especially in the Colombo District.

The Police Spokesman said 81 three-wheelers were found to have violated the travel restrictions.

DIG Ajith Rohana said the vehicles were seized, while 106 passengers who had travelled in the three-wheelers have been arrested for violating the quarantine law.

He said the seized three-wheelers will be produced in court, while charges will be filed against the suspects under the quarantine law. (Colombo Gazette)