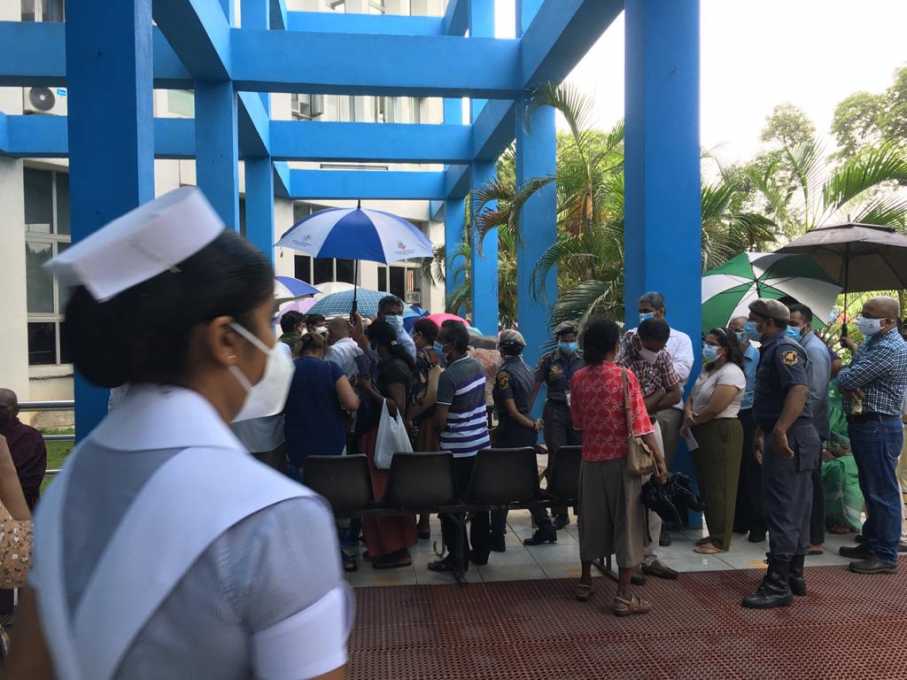 The Health Ministry insisted that there was no discrimination when administering the Covishield AstraZeneca vaccine, despite an incident which occurred at the Lady Ridgeway Hospital for Children (LRH) in Colombo today.

The Covishield AstraZeneca vaccine was administered to a select group of people at the Lady Ridgeway Hospital for Children today.

Large crowds stormed the hospital on hearing that the second dose of the AstraZeneca coronavirus vaccine was being administered to people but most of them had to return home disappointed.

Sources said the vaccination process was held to inoculate family members of health staff and the candidates were selected by the GMOA.

However, sources said that outsiders were also included in the list of candidates selected to receive the second jab.

Hospital sources added that the Lady Ridgeway Hospital for Children in Colombo was not involved in the vaccination drive.

They said the hospital had only provided the premises to operate as a vaccination centre as instructed by the Health Ministry.

Earlier today, Public Health Inspectors launched a strike claiming that the GMOA had allegedly given remaining AstraZeneca vaccines to their kith and kin.

Sri Lanka is currently facing a shortage of the AstraZeneca vaccine after the Serum Institute of India suspended delivery due to a new outbreak of the virus in India.

Deputy Director-General at the Ministry of Health Dr. Hemantha Herath told Colombo Gazette the incident had unfolded due to the mishandling of the situation and misinformation.

He said the Health Ministry will never discriminate against health workers and immediate action has been taken to rectify the situation.

Dr. Herath also said that the strike will not have an impact on the coronavirus containment process of the Health Ministry underway to curtail the spread of the third wave in Sri Lanka. (Colombo Gazette)