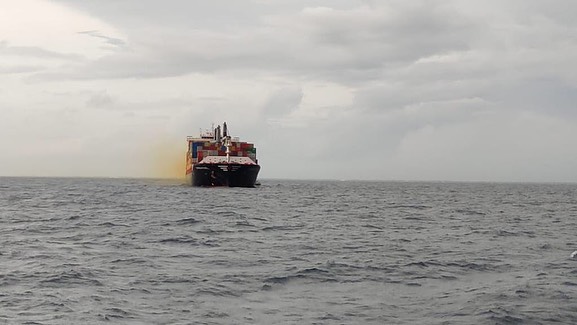 A 25 member crew has been rescued from a container ship which caught fire off the Colombo harbour on 21st May.

A major operation was launched to extinguish the flames of the ship.

The fire on the ship was contained but flames were seen again today (Tuesday).

The Sri Lanka Navy said an explosion had occurred on MV X-Press Pearl today intensifying the fire that had been contained.

Among the rescued crew members, 2 Indian nationals have sustained serious injuries and have been hospitalised.

The Navy said eight cargo containers onboard the vessel have fallen off the ship and into the sea.

The Sri Lanka Navy has deployed Bell-212 helicopters to drop dry chemical powder on the vessel to contain the fire.

The vessel will be moved to another 50 nautical miles away from Sri Lanka into the deep seas to minimise destruction to the marine environment.

Meanwhile, the Marine Environment Protection Authority (MEPA) said the container vessel which is in the seas off the Colombo Port is currently unstable.

Earlier, the Sri Lanka Navy said that it responded immediately to a distress call after the fire erupted onboard the container ship ‘X-Press Pearl’ last Thursday.

A tug from the Sri Lanka Ports Authority (SLPA) was also dispatched to engage in firefighting efforts.

Navy Spokesman, Captain Indika de Silva told Colombo Gazette that the fire had erupted on the MV X-Press Pearl due to a chemical reaction.

The vessel was reportedly en route to the Colombo Port from the Port in Gujarat, India when the fire had erupted. (Colombo Gazette)