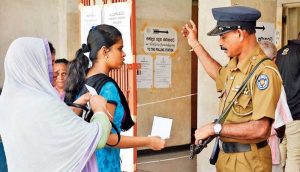 The invitation of the Parliament’s Select Committee on Electoral Reforms, for views and opinions from the people, should make them think also about the kind of reforms that the nation needs – whether it could stop with the poll scheme or should it extend to cover the nation’s political parties, too.

First and foremost, there is no form of an electoral system that could be called perfect, or even close to being perfect. In a multi-ethnic nation like Sri Lanka, however small be the geographical and demographic sizes, very many differences and distinctions keep cropping up from time to time, with the result, there can be no way by which the concerns and aspirations of every segment can be fulfilled, at any given point in time or another.

The nation, at the end of the day, wants a structured scheme of governance, where not only are the views of the people taken into account, but they are also seeming to be so. Hence, to blame one scheme or the other, in favour of yet another, can only be a never-ending process, now and ever.

On the face of it all is the question of ethnic representation. Or, the possibility for empowering the ethnic minorities to be able to have their say in elected governance. The belief that they hold the key to political administration went for a toss as recently as the 2019 presidential elections.

Ever since the introduction of the current scheme of proportionate representation (PR), the minorities were made to believe that no one can become the President of the nation in directly-held polls without taking a substantial number of them into confidence. In 2019, the present incumbent Gotabaya Rajapaksa became President without any substantial vote-share from the nation’s Tamil and Muslim minorities, who are mainly localised in the nation’s North and the East.

In fact, after acknowledging the minorities’ mood against the clan, Gotabaya did not even bother to campaign in the two Provinces, more especially the North. Yet, he became the President of the entire nation, including the Tamils and the Muslims. His rival, the present Leader of the Opposition in Parliament, Sajith Premadasa, had the overwhelming support of these two communities, but not much from his own.

Even in native Hambantota district that he shared with his victorious rival, Premadasa, Jr, did not score a substantial share of majority Sinhala voters, who dominate politics, public life, and societal numbers in Provinces other than the North and the East. So much so, he ended up contesting the subsequent parliamentary polls from the cosmopolitan Colombo City electoral district than from Hambantota, where he had polled the lowest 25 per cent vote-share in the presidential polls.

The PR scheme itself was thought of as a panacea for the nation’s prevailing electoral ills of the past. The first-past-the-post electoral scheme had been inherited from the pre-Independence era, when Sri Lanka became the first nation in these parts to usher in adult franchise. After nearly five decades, it was felt that the parliamentary form of government under the poll scheme meant that the elected prime minister need not have a single MP from the minority communities supporting him – at least in theory.

Given the demographic realities, democracy of the times dictated that the elected leader can get his parliamentary majority, including two-thirds from the majority community itself. In 1977, J R Jayawardena became Prime Minister with four-fifth majority in the House. In fact, the Tamil United Liberation Front (TULF) was the main Opposition party in Parliament, with 16 MPs.

That was when he marketed the twin-package of the presidential form of government coupled with PR scheme for parliamentary elections. The idea, as seen at the time, was that a directly elected President will need to count on the minorities, too, in big way or small, to touch the 50-per cent-plus one vote minimum, to be in office. The PR scheme would ensure that the minorities’ voices were not stifled inside Parliament, especially if the government party/alliance wanted to have its way.

But the current Parliament is proof enough that the PR scheme, too, has failed that professed hope. Not only has the President been elected on the near-exclusive votes of the majority Sinhala-Buddhist community, but even in Parliament, for which elections were held months later, President Gota’s party, namely, the SLPP-led combine, under his brother and Prime Minister, Mahinda Rajapaksa, won a two-thirds majority.

Now, there is a craving for a third kind of scheme, which is only a combination of the earlier two. The idea that is doing the rounds is to have a majority of the people’s representatives elected on the first-past-the-post system, but with an element of PR, too. Opinion is divided, whether or not to have the ‘National List’, whose aim was to allocate additional seats from a fixed pool, based on the poll percentages of individual political parties, for them to nominate their extra MPs.

It was aimed at ensuring that the lack of representation inherent to the first-past-the-post system did not recur. It is now anybody’s guess why the PR scheme itself should have been thought of when the first-past-the-poll scheme had been done away with. So much so, the ‘National List’ has become an additional blemish on the overall scheme, conferring autocratic powers on individual political party leaderships than already.

Yet, no one is now talking about revisiting the directly-elected Executive Presidency, and all electoral changes are going to be cosmetic, without addressing that core issue. In a nation with a multitude of political parties deriving their strength and electoral representation on the basis of ‘identity politics’, the inability of the ethnic parties to come together on a common minority plank has caused its own additional problems.

Today, and more than in theory, a President can be elected exclusively by the majority community. Given the inevitability of the continuing multitude of minority parties – of the Tamils, Muslims and the third category, namely, the Upcountry Tamils – it becomes easy for the ruling party – or alliance, whichever is in power – to manipulate the minds of MPs or leaders or both, to have the cake and eat it, too. But then that is what politics is all about.

In power, you have the SLPP alliance, which is a bouquet of multiple political colours and even ideologies, so to say. In the Opposition are also a similar bunch of political parties and ideologies. But the division is clear, and is more or less firm. Then you have the JVP, the ‘eternal third force’ that will never ever become the first, or even the second force, to be reckoned with.

This is not the case with the minorities parties. It is easier to count the number of stars in the sky on a full moon night than the number of political parties, separately among the Tamils, Muslims and Upcountry Tamils. At one point in time, during President Mahinda Rajapaksa’s term, the total number of Tamil language speaking MPs, including less than a handful in what essential were ‘Sinhala parties’, added up to 50 in a House of 225.

There was even a Tamil-speaking MP in the JVP, otherwise a ‘leftist, Sinhala-Buddhist nationalist party’. Ramalingam Chandrasekar was from the Upcountry Tamil community. But that all is in the past. Today, the ethnic divisions are deep and deep-seated, but with the premise that the minorities are all against the ruling Rajapaksas, and not others.

That includes war-time army commander, Field Marshal Sarath Fonseka, whom the war-victims of the Tamil community voted for the presidency, only months after the LTTE lost the war. Recently, on the anniversary of the conclusion of the decades-old war, Fonseka congratulated PM Mahinda, then President, and President Gota, at the time, Secretary, Defence – even though they are his sworn political enemies, to boot.

This also takes away any ‘principles’ behind the Tamil vote against the Rajapaksas, and by extension, the anti-Rajapaksa sentiments among the larger minority groupings. With the result, there are no hard and fast yardstick by which one can define, or even divine the kind of elected government that will represent all sections of the Sri Lankan society.

Add to all this the inherent autocracy that party constitutions are allowed confer on their ‘elected’ leaderships, and the picture is complete. On the one hand, you now have the Rajapaksas, especially PM Mahinda at the head of the ruling SLPP combine, whose continuing popularity among the Sinhala-Buddhist majority community with a steady 40-per cent of national vote-share, even in the most adverse political climes. On the other, you have had the UNP, the nation’s GoP, where former Prime Minister/Leader of the Opposition, Ranil Wickremesinghe’s unassailable continuance at the top ensured that the party is all but dead.