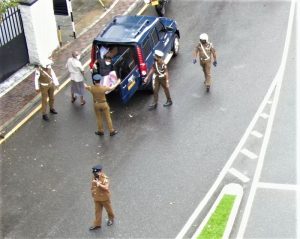 A number of people have been detained during special drone operations conducted in parts of Colombo and surrounding areas.

Reports had been received that people from condensed areas and housing complexes in the Colombo North and central areas were gathering during the travel restriction enforced in the country.

He said the drone operation was jointly carried out by the Police and the Special Task Force (STF) to monitor those who were gathering in violation of the quarantine law.

DIG Ajith Rohana said four people were arrested during the operation, while 27 were warned and released.

The Police Spokesman said the special drone operation will be continued today as well to apprehend those who violate the quarantine regulations in the Western Province. (Colombo Gazette)